Breaking News
Ogelle Signs Creative Content Pact with Trinidad and...
Champions League is back and Journey to the...
Magu, Detained By Police In Abuja For Further...
Ghana Opposition Leader Names Woman as Running Mate...
FashionGHANA Changes The Narrative Of Supporting African Fashion...
Magu was Not Arrested but Invited for Questioning–DSS,...
DSS Arrests Ibrahim Magu the Acting Chairman of...
Hushpuppi and Mr.Woodbery, Welcome to Chicago!
Wike, Atiku, Ihedioha, Kema Chikwe, to Lead PDP...
All Is Set for the Multi Million Dollar...
Home Culture Scope New King of the Yoruba Installed in Ghana
Culture Scope

New King of the Yoruba Installed in Ghana 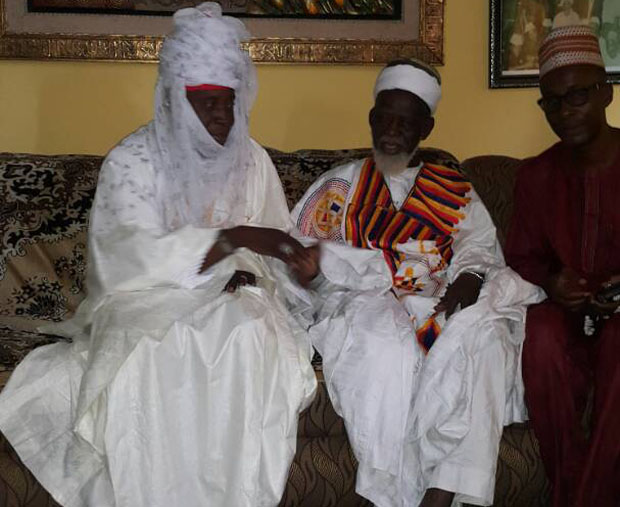 Eventually the long awaited Yoruba chief has emerged in the greater  Accra region of Ghana,  the newly-turbaned Chief Hamza Brimah VIII, head of the Yoruba community in the Greater Accra Region is 58 year old, Business man and grandson of Chief Brimah1, he is also known in his private life as oyibo (Whiteman) because he studied at Truman college in Chicago with a specialist  in social psychology.

He is the 8th chief to be installed in the Chieftaincy institution of Yoruba’s in Greater Accra that began in the Brimah-Peregrino family centuries ago  ,after  the death of the last king Chief Bashir Peregrino Brimah in June 2016. The Brimah Family have agreed that Chief Hamza Peregrino Brimah  should lead the community with his middle age and take them to the promise land of unity, peace ,security and prosperity of the people at large.

However there was a power tussle and tension as  who to become the 8th chief of the Yoruba’s in Accra between the Brimah and Peregrino Families, but the issue was resolved immediately in order to bring peace among them because Peregrino and Brimah are one family descendants of  Hamza Peregrino  and Yakubu Brimah also known in his life time as Govi.

Sheikh Dr Usman Sharubutu the National Chief Imam of Ghana has endorsed Hamza as the 8th Chief for the Yoruba Community in Accra, among those who have thrown their support behind the new Chief and recognised him are Nii Tetteh Tsuru The Akukpai Mantse who also doubles as the Gbese Mankralo The Landowners of Okaishie where the late Chief Brimah Palace was located, Nii Obo Adumaku II, Alhaji Abdul Kadir Tahir, Alhaji Musa Baba President of the Yoruba Community Ghana, Alhaji Sidiku Buari, Alhaji Razak El Alawa  the veteran Nigerian Journalist in Ghana who has won three time Awards of the Ghana Journalist Association, others are Alfa Kudu Kasim Mejida (More money) ,Alhaji Mohammed Faisal El Alawa and Mr. Bolanle Akintola of The Sun Newspaper Ghana, most of them were members of the delegation that paid allegiance to him during a recent  visit to  his palace.

History has been told that the Yoruba’s are among the first Nigerian settlers in Ghana over 200 years ago ,during the pre-colonial times as merchants through different routes to then Gold coast now republic of Ghana, they were mainly from Ilorin ,Oyo, Abeokuta and Oshogbo in the western part of Nigeria as the Yoruba’s or Oduduwa people.

They found themselves working in different places in the Gold coast as traders of merchandize, Railway workers and artisans in the century,  they made progressive impact to the socio-economic development of the then Gold coast, as a result of their influence  Chief Brimah the 1st  was invited to the Christiansborg castle the seat of British Colonial government for a discussion by Major Herbert Bryant the then acting Governor General ,who also appointed Chief Brimah as the head of the Mohammed community because most of them were Muslims, the community   later became the Yoruba community in Ghana, Nii King Tackie Tawiah The 1st,also endorsed him and presented a sword of office to him, whom he was also an in-law to  because Chief Brimah’s  wife Fatima Okpedu Peregrino was from the then Ga Traditional rulers home.

Does your website have a contact page? I’m having a tough time locating it but, I’d like to shoot you an e-mail. I’ve got some ideas for your blog you might be interested in hearing. Either way, great site and I look forward to seeing it improve over time.

Why Ex VP of Gambia Fatoumata...

The Endless Festivities of Africa’s Longest...