Four people died while 26 were injured in a road accident involving two buses on the Lagos-Ore-Benin highway in Odigbo Local Government Area of Ondo State.

Mr. Olusegun Ogungbemide, Head of Operation and Deputy Sector Commander of the Federal Road Safety Commission (FRSC),Ondo Command, confirmed the incident to the News Agency of Nigeria (NAN) on telephone on Thursday, in Akure. 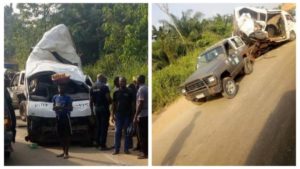 “There was an accident on Wednesday between 14:32hrs and 14:56hrs in which 30 people were involved.

According to him, the injured had been taken to Ore General Hospital while the corpses had been deposited at Opeyemi Hospital in Ore.

Ogungbemide, who said that the two vehicles had been towed away by the police, admonished all motorists to shun over speeding, especially during the Yuletide.

EFCC CELL: 6 Things you take for granted that you will struggle for in EFCC Detention

Commuters groan over exploitation as checkpoint...