Breaking News
Magu, Detained By Police In Abuja For Further...
Ghana Opposition Leader Names Woman as Running Mate...
FashionGHANA Changes The Narrative Of Supporting African Fashion...
Magu was Not Arrested but Invited for Questioning–DSS,...
DSS Arrests Ibrahim Magu the Acting Chairman of...
Hushpuppi and Mr.Woodbery, Welcome to Chicago!
Wike, Atiku, Ihedioha, Kema Chikwe, to Lead PDP...
All Is Set for the Multi Million Dollar...
Thiago Alcantara On his way to Liverpool for...
Tension in Ghana Market Over the Arrest of...
Home Politics The Full Story: How Amb. Femi Abikoye Scored A Diplomatic Goal By Resolving All Nigeria Community (ANC) Ghana ‘s Over Half A Decade Fiasco .
PoliticsNews

The Full Story: How Amb. Femi Abikoye Scored A Diplomatic Goal By Resolving All Nigeria Community (ANC) Ghana ‘s Over Half A Decade Fiasco .

6Years After : All Nigeria Community (ANC)Ghana Gets A New President

November 23rd  Marked a new era in the All Nigerian Community Ghana (ANC Ghana) the umbrella association of the about 2 million Nigerians resident in Ghana  as it finally elects a new president after over 7 years leadership debacle that  stalled its activities and services to Nigerians in Ghana.

The ANC Ghana after its in house deliberation on 23rd November 2019 following the guidelines and suggestion of the Nigeria High Commission Ghana  publicly announced Alhaji Saliu Mohammed of Arewa Community Ghana as its president and Mr. Louis Okorie of the Igbo community as 1st Vice-president while Dr. Bayo Albert a former president of the Organisation whose tenure was short-lived  representing Yoruba community as the 2nd Vice president, thereby resorting to the zoning policy as advised and agreed by almost all the warring faction as the way out of the quandary that the Organisation has been stuck in for over 4years that its last embattled leader’s time in office ended. A dynamic solution engineered by Amb. Olufemi Abikoye. 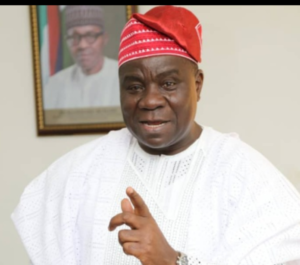 Sometime in 2008 the old guards championing the affairs of the ANC Ghana thought there was need for a new breed of people to come and take over from them. That brought into place a new executive led by Dr. Prince Uche, this new school leadership kick-started the revival of the organization, Dr Prince Uche later resigned citing personal reasons after sometime in office, then Dr. Bayo Albert took over mantle of leadership and that was the beginning of the first phase of internal leadership wrangling which started at the tail end of Senator Musilliu Obanikoro’s administration as High Commissioner of Nigeria to Ghana in 2012.

Some members of the executive didn’t want Bayo to be there, some communities in the organization had issues with their delegates; the situation became chaotic and confusing , Ironically, that was the time that the then High Commissioner (of Nigeria to Ghana Musiliu Obanikoro) was also leaving office and a new one (Oluseyi Onafowokan) was coming in. The new High Commissioner actually came to meet this confusion; and subsequently assisted to organize new elections which unfortunately, did not also go down well with Dr. Bayo.

Bayo thought that the High Commissioner ought not to have interfered with the process but in reality, the High Commissioner did not interfere; he only helped to facilitate the election process and so immediately after the elections, Bayo sued the board of trustees, including the newly elected executive, to court. And that was the beginning of even more troubles according to Dr Emma Okeson the BOT Chairman of the Organisation.

“On the day of the inauguration, which was October 1, 2013, the High Commissioner pronounced the dissolution of the Board of Trustees, but which action was contrary to the constitution that had been adopted prior to the elections. Unfortunately, nobody spoke about it; and, I think, that was the last straw that broke the camel’s back.

Subsequently, the Board of Trustees was unable to carry out its constitutional mandate, which is to be an over-sight body over the activities of the executive to ensure that the executive complies with the provisions of the constitution in their day-to-day operations. So, there was a vacuum. That vacuum created a situation whereby the executive decided to do whatever they liked. And, of course, confusion set in.

That situation persisted from 2013 up to 2015. So, this is the genesis of the crisis that rocked the All Nigeria Community-Ghana.”  Dr. Emma Okeson   the board of trustee chairman of ANC Ghana explained while providing insight to the issue in an interview to a Ghana national media  in 2016.

The Moses Owharo administration which was ushered in on 1st of October 2013 to take over from Dr. Bayo Albert’s administration started off on a good note but took some unconstitutional steps along the line by dropping the entire constitution that oversaw the election which brought him to power without resorting at least to its amendment and rather presented a new constitution which elongated his tenure from 2 to 4 years and besides was not generally adopted by the ANC congress.

The Board of trustees of ANC Ghana resisted the infamous move of Moses Owharo on the basis that you don’t just throw away one constitution and bring another one just like that; because it’s not permissible by what is written in the original constitution, amending the constitution has a process to follow, discarding a subsisting constitution and bringing another to replace it without following the judicial process is an act flawed by existing laws of the organization they reiterated.

Owharo’s tenure automatically came to an end on September 28, 2015 and the BOT accused him of hastily convening a national delegate’s congress. In which only three, out of ten members of the national executive was in attendance; out of seventeen Board of Trustees members, only four were present; out of the ten regions of Ghana with a total tally of 40 delegates, not up to twelve delegates attended. By the constitution, that number does not form a quorum, what he had would be best described as observers.

To the BOT the event was merely a ploy by Owharo to extend his tenure. Unfortunately for him, not all members of the executive agreed to that ploy which was manifested by their absence at the event so in the end what Owharo achieved was keeping aside the constitution and prolonging his tenure by another one year. Which the BOT considered shambolic and rape of the constitution

The BOT in consultation with strategic stakeholders in the organization tried their best to ensure that the right thing is done and the Owharo led ANC Ghana resisted all their attempts in finding a way forward resorting to legal battles in court and various attack on personalities in the media which reduced the community to nothing but a battle ground.

For the records, since Obanikoro’s departure in 2012,the preceding administrations at the Nigerian High Commission Ghana all tried in futility to address this situations in different ways but none recorded an excellent success. Amb. Oluseyi Onafowokan took over from 2012 as the High Commissioner till he retired from service in 2015 disbanded the board of trustees a move which the BOTs faulted as unconstitutional.

Mr. O. O Osasona became Charge d Affairs briefly after Amb.Onafowokan’s retirement and tried to mediate in between the parties with no success.

Mrs. Sonaike Ayodeji  who arrived in Dec 2015 and  spent her time as acting high commissioner for 19 months before she was assigned to Philippines as Nigeria’s Ambassador to the nation around June 2017, at her own time called a press conference and dissolved the then executives of ANC Ghana led by Owharo and handed the leadership of the ANC to the leaders of the tribal communities that made up the organization and charged them to conduct a new election and choose a leader which was not realized.

Now  Amb. Olufemi Abikoye has taken the bull the horn, by reversing to an old method of appointing leadership in the ANC Ghana which is zoning of the leadership position in which the tribal community that’s its their time to provide a president  organizes an internal election to choose who shall be the president of ANC Ghana at   their turn.

From 2012 to date the ANC power has rotated from Dr. Prince Uche of Igbo Community, Dr. Bayo Albert of Yoruba Community, Mr. Moses Owharo of South-South Community and now has gone fully circle as Alhaji Saliu Mohammed of Arewa Community has been selected as the new ANC president.

Amb. Olufemi Abikoye has lived up to his promise of repositioning Nigeria’s diplomatic footprints in Ghana when he assumed office and received his letter of credence from President Nana Addo Dankwa Akuffo Addo on Friday 18th of August 2017.

The High Commissioners role in overseeing the dismantling of the internal altercation that crippled the umbrella body  of Nigerians in Ghana, rendering it ineffective for almost 5 years and  stifled the socio economic progress of Nigerians in Ghana  has been commended.

The Ambassador foregoing the initial plan of having an election thereby changing the status quo by resorting to the equity of zoning policy has been termed impressive, and possibly the only immediate solution to this very sensitive issue that has posed a great challenge to administrations before him .

Nigerians in Ghana appreciates his intervention in the matter with a government hammer for the interest of peace and harmonic coexistence of Nigerians here , wielding his influence  as  Nigeria’s High Commissioner and the paramount leader of Nigerians in  Ghana , an office saddled with the responsibility of providing the right direction  to Nigerians in Ghana and ensuring that the country’s image is not brought to disrepute.

Some really nice stuff on this internet site, I enjoy it.

Magu, Detained By Police In Abuja...

Magu was Not Arrested but Invited...