EFCC CELL: 6 Things you take for granted that you will struggle for in EFCC Detention

Corruption has been touted as the bane of Nigeria’s development as public office holders are occasionally  found wanting morally  in discharging their official duties as custodians of the peoples common wealth and are mostly accused of siphoning public funds for their personal needs, and gratification of their exorbitant desires be it to get re elected as Governors or senators or to protect their future generation from poverty at the expense of the well being and survival of the ordinary man. This led to the creation of the Economic and Financial Crime Commission (EFCC) a Nigerian law enforcement agency that investigates financial crimes such as advance fee fraud and money laundering established in 2003, partially in response to pressure from the Financial Action Task Force on Money Laundering (FATF), which named Nigeria as one of 23 countries non-cooperative in the international community’s efforts to fight money laundering.

Preceding the rise of digital financial crimes in the last 2decades that echoes in the world as a global society , the EFCC has intensified its fight against corruption in Nigeria, now not just against politicians but also against yahoo boys and   perpetrators of sorts of financial crimes among the general public which led to the record conviction of 890 persons from January 2019 to Oct 2019 and hundreds of more still ongoing  as reported in the mass media. Nigerians are becoming aware of the EFCC no nonsense approach in discharging their duties. Though some accuse them of human rights abuse via  long detaining  of suspects beyond  the time stipulated by law ,and others  blame  them of resorting to media trial of suspects before conclusion of their  investigations to determine a suspects culpability in the crime accused of. In a nation where the police is accused of being weak with outdated means of investigating crime resorting only to torture of suspects, the EFCC has become a force to be reckoned with in the Nigerian crime sector as almost everyone wants to have nothing to do with them from governors, senators,bank managers to yahoo boys due to the bureaucratic powers that they are endorsed with , the commission in 2018 launched Operation Cyber Storm to curb the activities of internet fraudsters and over 150 suspects have been reportedly arrested across the country as of late last year.

The EFCC has 15 offices and different detention centers in Nigeria, from Abuja the federal capital, to Lagos the economic hub of the nation to Sokoto, Oyo, Enugu and more but its unarguable that the same laws guides the operatives of all their detention centers and we are privy to the info that there are 5 basic things people takes for granted that they are hard to come by or they may not see or experience while in EFCC detention. 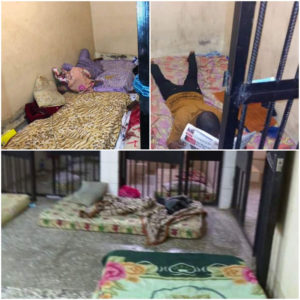 1.    Pen –  A pen is a writing instrument used to apply ink to a surface, usually paper, for writing or drawing, biro as popularly called in Nigeria is not allowed in EFCC Cells, because of its sharp ball point which can be used as weapon during altercation among cellmates , though some inmates at the cell request for pen from the EFCC officials on duty to exchange contacts from cell mates who have been granted their release or going to court where there is possibility of being remanded in a correctional facility or allowed to go home,there is need to exchange contacts in order to be able to reconnect with each other when they  gain their own freedom, the EFCC officials   always grants them the request knowing full well the 100% compliance of the non violence law of the cell where fighting is not allowed.

2.    Phone:  To make calls and receive calls is a privilege to inmates at the Cell and not a right, as in other countries, phones and internet connectivity are considered contraband for people in detention. In EFCC Detention, you are not allowed to possess a phone; there is an allotted time for making calls which are mostly week days. People in EFCC detention make calls , which are mostly  to follow up and get updates from their lawyers on their case and also inquire over the welfare of their loved ones but the time for this call is brief and only  allotted to the inmates that has indicated their interest to make a call by writing their names.

3. Private chat with visitors: There is no room for romance or a private chat with a visitor at the EFCC Cell, as visits are allowed between 10am to 2pm during week days and are to be kept as brief as possible in order to allow all detainees who are called out in batches of 4 or 5 people to be able to see their own visitors. Detainees and their guests are mostly advised to have their conversation in English language, over a counter separating them with few members of the commission on duty watching every exchange of items or packs brought for detainees to ensure nothing illicit takes place.

4.  Freedom- The right to personal liberty is one of the most central human rights as it is connected to the essentialist rudiments of an individual’s physical freedom. The right to liberty requires that the arrest or detention of an individual must be in accordance to the law. The right therefore protects the individual against the excesses of the government and its agents. The main quagmire of the right to liberty in Nigeria is the executive arm of government in Nigeria at most times permits continuous detention as in the case of Sambo Dasuki  the retired Nigerian Army Colonel and former National Security Adviser to the former President of Nigeria, Goodluck Ebele Jonathan who was recently released after years in DSS detention.  In EFCC cell, detainees are free to move around within the confines of the cell and its blocks and are only allowed outside the cell when they have visitors or to be questioned in relation to their case or for other special reasons like going to the clinic for medical attention etc. Detainees in EFCC Cell are likely to spend a week in detention without having a feel of the sun depending on the frequency of the need for their assistance in the investigation of the issue that brought them to the commission.

5. Cash: There is a limit to an amount of cash that you are allowed to have on your person or to keep in your possession in the Cell which mostly does not exceed 5000 Naira or at most 10,000 Naira, though at the counter you can keep a more larger sum of cash which will be recorded and kept for your use as its needed so far the cash is not considered an exhibit or regarded as an evidence or part of the investigation of your case.

6. Alcohol as contraband and its prohibition in correctional facilities is as good as a global practice; persons in EFCC detention are not permitted to have alcoholic beverages in their possession, as it is not allowed into the cells. The harmful use of alcohol is a major public health concern globally as people who consume alcohol are generally advised to drink responsibly.

Commuters groan over exploitation as checkpoint...