Breaking News
Magu, Detained By Police In Abuja For Further...
Ghana Opposition Leader Names Woman as Running Mate...
FashionGHANA Changes The Narrative Of Supporting African Fashion...
Magu was Not Arrested but Invited for Questioning–DSS,...
DSS Arrests Ibrahim Magu the Acting Chairman of...
Hushpuppi and Mr.Woodbery, Welcome to Chicago!
Wike, Atiku, Ihedioha, Kema Chikwe, to Lead PDP...
All Is Set for the Multi Million Dollar...
Thiago Alcantara On his way to Liverpool for...
Tension in Ghana Market Over the Arrest of...
Home Uncategorized African Women and Civic Society Organisations to Sign Accord Against Human Trafficking in Accra this August
Uncategorized

The 3rd African Women Intercultural Dialogue an advocacy event for shifting consciousness through the redistribution of cultural reflections on the question of women and girl child in Africa endorsed by UN Women, UNESCO and other developmental orgs will be taking place again from the 21st to 23rd August 2020. The event designed towards creating an enabling platform in which Iconic individuals drawn from different facets of the African society comes together and discuss the link of negative cultural practice to under-development of the modern African girl-child and woman and aim to overturn them via legislation process in our respective nations in the continent will be held in Accra Ghana. 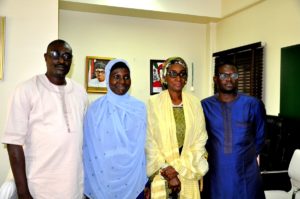 The event is returning to the city of Accra Ghana where it was held for the first time in 2017 at the International Conference Center in the city capital, an occasion that was chaired by Amb. Erieka Bennett of the Diaspora Africa Forum , and Mr. Carl Ampah that represented UNESCO Ghana.
The 2020 Dialogue in Accra on the theme : Culture and its underrated place in measures aimed at improving the wellbeing of the girl child and women in general. On this theme, the African Women Intercultural Dialogue will focus on premises of cultural influences in social issues contingent to the crime of trafficking in persons and will also affirm Africa’s endangered positive cultural norms from cultural clashes and propagate cross cultural intelligence and positive cultural exchange in today’s ever-evolving world. 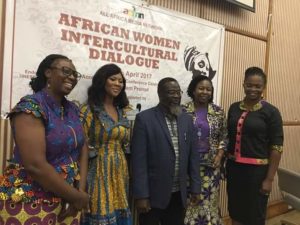 The theme for this year allow multi-modal contributions that reaches out to all interested parties on the issues of human trafficking and to articulate on the complex nature especially in this era of Information overload. The goal and long-term aim is to provide a policy briefing insight for cognitive reflection and deliberation amongst leaders of thoughts in various fields- targeted at generating an educational and policy blueprint to review and re-think socially transmitted beliefs, knowledge, customs, skills, memes and languages that unconsciously support the dis-empowering women in developing societies and weakens women’s social capital in Africa.

Aside the dialogue the 2020 event Is expected to host the first general assembly of the Non-Profit Coalition of Civic Societies ,Cultural and Community leaders against human trafficking in which the foundational member organisations of the coalition from at least 6 African countries are expected to sign the agreement that will transcend to the reality of this dream of non profit sector coming together unify their engagement against the persisting scourge of human trafficking.
The motivation behind this Non Profit Sector Coalition of Civic Societies, Local and Cultural Leaders Initiative Against Human Trafficking is to garner a transnational and multi-sectoral synergy in presenting an actionable front against human trafficking. The initiative feeds on affording a modality to the bimodal initiatives that informs the commitments of different organizations fighting the menace of women and human trafficking in general- to provide a platform where those initiatives can find a communalized voice that reaches out to needs and contingencies in the continental campaign to defeat human trafficking in entirety.

Nigeria’s New Broadcasting Star: The Ingenuity and Brilliance of Uncle Jude at 41.

Some times its a pain in the ass to read what blog owners wrote but this internet site is really user friendly! .

It’s hard to find knowledgeable people on this topic, but you sound like you know what you’re talking about! Thanks

I simply want to say I’m very new to blogging and site-building and certainly loved your blog site. More than likely I’m planning to bookmark your blog . You really have incredible stories. Thanks for sharing with us your website page.