Breaking News
Chuma-Nwoha,Relief and Dick Tiger roads -Imo people thanks...
Law Meets Art: Legal Luminary Congregates with Nomzky...
Organic-Agribusiness Exhibition and Conference to hold in May.
Ngugi wa Thiongo Raises Ghosts of Past and...
Tokyo2020: FUTO Undergrad ‘Lizzy’ goes Down to a...
PEGASUS:How to Check Spyware that Records You with...
ISOPADEC: The Exemplary Leadership of Chief Charles Orie...
Kanye and JAY-Z reunite for new song after...
Half Nigerian Nadia Eke Emerges Ghana’s Leading Olympic...
Dr.Emma Okeson Commends NANS Ghana on their Successful...
Ogelle e-Learning will revolutionize education in Africa –...
MultiChoice Reveals Date for BBNaija Season 6
Governor Uzodinma’s Enemies Are In A Pit,yet Still...
Gov. Uzodinma Wants Politicians to Speak Against Insecurity...
Home Uncategorized The Hunt for Izuchukwu Odili fingered as the head of the syndicate scamming People in EFCC Detention
Uncategorized

The thoroughness and strictness of the Nigeria’s Economic and Financial Crime Commission (EFCC) in discharging their duties has drawn lots of commendation and criticism as well, regardless that the commission created in 2003 has tried to keep operating at a commendable height far above what is obtainable from the Nigerian Police force and other law enforcement agencies in the nation and is in the process of perfecting its units of operation and modus operandi.

Commendations for the diligent efforts of the Commission

commendations for the efforts of the commission has been very high because the commission leaves no stone unturned in their investigation process, they take their time to search for the incriminating angle in the transactions or deals that was petitioned to them, which they  extend to the search of the possible number of conspirators and the connecting thread that links them all to the crime, their intention is always to bust the entire syndicate involved and every personnel complicit in any crime and this coupled with the semi analogue system that Nigerian administrative process is still locked in has required them keeping people in their detention facility longer and sometimes beyond the time required by law.

There have been reasonable number of critics against the commission in the sense that there is a specific time frame required by law to keep a suspect in detention before taking him or her to court for the judicial process to commence in determining their fate if guilty or innocent of the crime accused, and for a commission known to be handling  sensitive financial cases perpetrated in sophisticated manners ,the commission is perceived to be prone to always go to court to request for permission to keep suspects longer in their detention and this creates an anxiety and frenzy for inmates at their detention facilities to struggle for any possible means of regaining their freedom and this has fashioned an avenue for  some scammers in the name of bail agents to scam detainees at the EFCC detention facility by playing along their clients desperation for their delayed call for  freedom to perpetrate their silent scam. 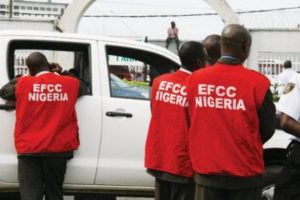 A former detainee of Okotie eboh detention facility of EFCC in Ikoyi Lagos State has fingered one Izuchukwu Odili C.E.O of Vivid Concept and Crystal Imagination limited all in Abuja of scamming him of the sum of Two hundred thousand naira. While in detention Mr. Iwuoha reached out to his friends to assist him with a lawyer or any means of meeting his stringent bail conditions in order to leave the detention on administrative bail since it was taking time for the commission to finish their investigation in order to charge him to court or acquit him from the petition.

the Imo State born Abuja Government contract hunter told one of Iwuoha’s contact that he knows a certain GO who he claims is the head of the legal dept of the Abuja office of the EFCC and that the GO has looked into the issue and needs the sum of Two Hundred Thousand Naira to facilitate and speed up Iwuoha’s administrative process which he claimed the GO (name withheld) can  do with just a call to his colleagues, Mr. Iwuoha requested for Izuchukwu Odili’s number who had  already been linked to Iwuoha cousin who effected the transfer of the said sum installmentally to him, the recipient and the paying account information has been tendered as exhibits alongside recorded conversations that were made available as well.

Mr. Iwuoha also called him from detention after waiting for days and having not met any sureties for his bail during one of the occasions that he was granted permission to make call which he has indicated the time and day of the said call which is an information that the commission can also corroborate through the communication network that they used in the communication, while on the said call Izuchukwu Odili told him that 3 sureties had come to the Office but one came without his certificate and qualifications while other two didn’t meet the grade required.

Iwuoha asked his Investigating Officer if anyone had come to inquire for his bail or submitted any documents which he got a negative answer to, he told his cousin to clarify issues with Izuchukwu Odili who then switched off his pone and weeks later put it on and refused responding to calls from Iwuoha and his family members.

EFCC Bows to no outside pressure against following their laid down procedure.

Iwuoha luckily has been granted bail since November 19th 2019 and has commenced the manhunt for Izuchukwu Odili who is still in Abuja but hiding from the people that connected him to Iwuoha and has refused responding to his calls and messages, Iwuoha was swift in decoding the scam strategy of Izuchukwu Odili because the EFCC officers always warn them against playing along with people that will promise them of paying money for swift release and bla bla, because the commission must go through its rigorous process on every case before getting to the decision of granting the suspect bail or charging him or her to court and no amount of power play or persuasion will get the commission to act other wise because this is their laid down procedure.

Now Iwuoha is leading the manhunt to recover his funds from Mr. Izuchukwu Odili and also going public with the issue in order to sensitize other people in EFCC detention not to fall for the scam as him and a lot of detainees has already experienced the fraud  and exchanges sorrowful stories in the cell on how some heartless Nigerians including some lawyers are defrauding people in detention in the guise of helping to fasten their release.

PEGASUS:How to Check Spyware that Records You with your Phone Camera.

Gov. Uzodinma Wants Politicians to Speak Against Insecurity In the Country

Governor Uzodinma: Service Above Self Or Swimming In Murky Water

Imo:Hope Impose Dusk To Dawn Curfew In Orlu as Militants Clash with Police

2 Days to Go:For the enthronement of a just society, Tiger Eye Journal, arrives.

Tension in South African as White and Black face off over Farm Murders.

Simply want to say your article is as astonishing. The clearness in your post is simply nice and i can assume you’re an expert on this subject. Fine with your permission allow me to grab your feed to keep updated with forthcoming post. Thanks a million and please continue the gratifying work.

I just want to mention I am just new to weblog and actually loved you’re page. Most likely I’m likely to bookmark your site . You definitely come with perfect articles. Thanks for sharing with us your web site.

PEGASUS:How to Check Spyware that Records...

Governor Uzodinma: Service Above Self Or...