The Super Eagles trio of Samuel Chukwueze ,Kenneth Omeruo and Chidozie Awaziem will be facing each other in a crunch game in La Liga Santander today.

Samuel Chukwueze the 20year old Villareal Winger whose presence on the pitch is very essential for Villareal FC hopes of securing an Euro spot in next season will have no place for empathy in his emotions as playing in Europe next season is pivotal towards advancing his soccer career globally as it will enhance his experience in the sport that he enjoys the most.

Chukwueze’s release clause was recently raised to 100 Million Euros is regarded as one of the most promising stars of the game of soccer in the globe today, he will be coming up against the two Super eagles defenders who are hoping to ensure that their team FC Leganes is not relegated to the lower division at the end of the season as they currently occupy the 19th position with 20 points out of 26 matched they have played so far. 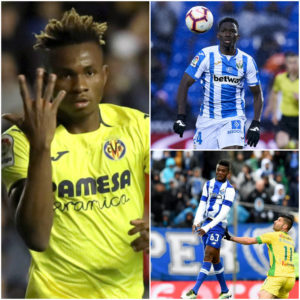 Kenneth Omeruo  who is one of the pillars of the Leganes FC defense having featured in 18 out of the 26 matches for Leganes scoring 1 goal and accruing 5 yellow cards ,he has started and featured on the bench of  most of the  FC Leganes  games this season, having  first arrived to the club on a loan deal in 15th of August 2018,in October of the same year he stated that he is enjoying playing in Spain and want his loan deal to be a permanent contract , on 13th of August last year he signed a permanent deal with Leganes ending his 7year spell at Chelsea.

Omeruo who has been described as a “tall, rangy but strong centre-back” and a “level-headed and determined youngster” is an important player in Leganes and as a centre back will be pivotal in stopping his compatriot this evening.

To Assist Omeruo in stemming the tide of attacks expected from Villarreal’s Chukwueze, Santi Cazorla and others is  Chidozie Awaziem who he has formed a strong partnership with the heart of   Leganes defence having played alongside his super eagles mate in recent games .  Awaziem who is still on loan to Leganes from FC Porto has played 17 Games for the Spanish side this 2019/2020 season.

Leganes has suffered a 3-0 defeat to Villareal in the first leg of the season at their home stadium, so there is slim chance of them taking the maximum points as visitors to Villareal who is currently at the 8th position with 38th points out of the 26 matches they have played so far, this clash presents an opportunity for Nigerians to watch 3 of their national team stars in one game to envisage what to expect of them in the coming nations cup fixtures at the end of the month.

Nice post. I learn something more challenging on different blogs everyday. It will always be stimulating to read content from other writers and practice a little something from their store. I’d prefer to use some with the content on my blog whether you don’t mind. Natually I’ll give you a link on your web blog. Thanks for sharing.

Premier League Confirm Changes to Next...

Messi to Inter? as his Father...