Even in death the magnanimity of his persona resounds as his friends   has already  held Virgil for him in  far away United Arab Emirates, and service of songs in VGC Park, Lagos state on Thursday 5th of March 2020.

Though the circumstances surrounding his death is yet to be completely  unraveled ,the family has opted to give peace a chance by going ahead with giving him their last respect and embarking on his funeral arrangement  and internment.

The Senatorial candidate of the Action Alliance Party (AA) in the 2019 Election Engr. Ndubuisi Emenike who is arguably among the youngest Imo son to vie for a senatorial seat was reportedly gunned down by a Civil Defence Officer in a case of accidental discharge amidst the victory gathering of the APC in Umunachi Okwelle LGA Sunday evening at the home of Princess Miriam Onuoha following her victory as APC candidate in the Okigwe South Federal legislative seat rerun held on 25th January 2020.

The renowned philanthropist and founder of Ndubuisi Emenike Foundation is popularly as ‘Ototo ‘ a name that is in accordance with his huge features at over 6.ft tall, the young man of 35 went into politics to attract dividends of democracy and presence of federal projects to his constituency, he has been a close friend and ally of Chief Ugwumba Uche Nwosu the Guber flag bearer of AA in the last election in Imo state , son in law to the former Governor of Imo State Owelle Anayo Rochas Okorocha.

Engineer Emenike was bracing to contend for the race of the Okigwe senatorial seat the 3rd time,and was undergoing consultation with his part stake holders as the seat became  vacant following  the untimely death of Senator  Benjamin Uwajimuogu of All Progressives Congress (APC) who was occupying the seat and had won Engr. Emenike of Action Alliance (AA)and Hon. Patrick Ndubueze of Peoples Democratic Party (PDP) in a closely fought race that went into rerun before the late Uwajimuogu was finally declared the victor. 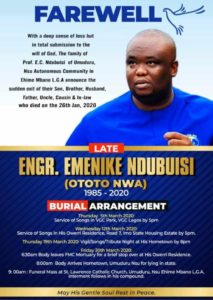 On New Year’s Day Engineer Emenike had visited the former Governor of Imo State Senator Owelle Anayo Rochas Okorocha where he is expected to meet with his then party leader and friend Ugwumba Uche Nwosu the governors Son in law and weeks later on the 26th of January he fell to a bullet from the noozle of the Gun of a Civil Defence Corps member.

Engineer Emenike Ndubuisi a business man that had his hands in different pies from Oil services company, running  Gas Stations to politics , will be laid to rest at his hometown in Umuduru, Nsu autonomous community in Ehime Mbano LGA on Friday 20th of March 2020. There will be service of songs held for him in his Owerri residence on Wednesday the 12th of March. By 6 am on the Friday the 20th his body will leave Aladinma mortuary for a brief stop at his Owerri residence before all roads will lead to his hometown for his lying of state in his country home, his funeral mass will follow at St Lawrence Catholic church Umuduru Nsu and his internment in his residence.

For a fact the untimely exit of the promising young engineer with huge prospects politically and economically has left the youth and the aged in Imo in a state of shock. He is survived by his wife, two young kids and his Elder brother and sisters.

Suspected Imo Herdsmen Attack: The Half...