The Magic of Reincarnation: How Living in Bondage Conquered Again on its Return.

Living in Bondage: Breaking Free The sequel to the 1992 Nollywood blockbuster of the same title that engineered the new era of film making in Nigeria has conquered again on its return like it did 27 years ago.

The sequel which was directed by veteran actor and first time director Ramsey Nouah who missed out on the first motion picture of the same title from which the sequel was created ,  won the best movie director as the movie has reconfirmed its greatness by winning a7 out of the 11 categories it was nominated for including the overall best movie of the year award.

Both of the Nigerian thriller drama ,the original that came out 27 years ago and its sequel of 2019 had one in thing common they are both game-changers ,the first is pivotal in creating the Nollywood that we know today and its sequel has prepared the settings for the necessary evolution that the industry desperately needs. It has its own original soundtrack album that featured quintessential acts in the music industry like Flavour and no wonder the best soundtrack  award is part of the 7 AMVCA plaques on its stables now for the song of Larry Gaaga and Flavour. 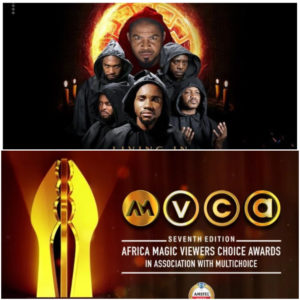 Living in Bondage Overall Best Movie at the 7th AMVCA

The choice of the cast is another aspect that the production got an excellent mark not because of the legends in the industry like Kenneth Okonwo, Bob Manuel Udokwu, Ndidi Obi, Kanayo O Kanayo and others but the finesse with which its new inclusions like, Munachi Abii ,Shawn Faqua and Enyinna Nwigwe and Swanky JKA depicted their chosen characters.

Swanky JKA who was only three months old when the first Living in Bondage was released over 2 decades ago and played the role of Nnamdi ,Andy’s son ,the main character,his believable performance rewarded him with Trailblazer Award at the AMVCA.

Despite that the plot of the first Living in Bondage was written by Kenneth Nnebue and Okechukwu Ogunjiofor on the theme of greed and quest for wealth ,power via occultism the writers of the sequel deserves commendation for their innovative artistry in re-inventing the same old story and modernizing it by including modern characteristics of tales from occult order’s which trended in not too long ago and also they were inventive in their telling of the story and avoided having to rely on flashback or time consuming exposition from its characters.

Another dynamic element they employed is by crafting the sequel in way that ensures its partial autonomy from the 1992 blockbuster, you do not necessarily need to see the first movie to understand the direction of the sequel, this is great because since the youths of now are mostly born after he millennial are too young to have seen the original when it came out,so this presents a fresh outlook to the whole story.

Solid direction, fantastic production design,  wonderful collection of music that suits the mood of each scene, and a perfect cast are some of the things that made Living in Bondage: Breaking Free a memorable flick for the present and we believe in its power to usher a new era of innovation and excellence in Nollywood production in the coming decades as it did at the time of its first coming 27 years ago.

Covid-19 Rampage in Ghana? 4 New Confirmed Cases had been in contact with Over 200 Other Persons.

Nigeria’s New Broadcasting Star: The Ingenuity and Brilliance of Uncle Jude at 41.

NIVEA Accra Fashion Week Is Only One Week Away, Here Is What To Expect

Highlife: ‘ One One Billion’ Songster Arrives Ghana for a Concert.

How a Nollywood Queen is helping...