Breaking News
Ogelle Signs Creative Content Pact with Trinidad and...
Champions League is back and Journey to the...
Magu, Detained By Police In Abuja For Further...
Ghana Opposition Leader Names Woman as Running Mate...
FashionGHANA Changes The Narrative Of Supporting African Fashion...
Magu was Not Arrested but Invited for Questioning–DSS,...
DSS Arrests Ibrahim Magu the Acting Chairman of...
Hushpuppi and Mr.Woodbery, Welcome to Chicago!
Wike, Atiku, Ihedioha, Kema Chikwe, to Lead PDP...
All Is Set for the Multi Million Dollar...
Home Health Covid-19 Rampage in Ghana? 4 New Confirmed Cases had been in contact with Over 200 Other Persons.
Health

Covid-19 Rampage in Ghana? 4 New Confirmed Cases had been in contact with Over 200 Other Persons.

The Ghanaian Government led by President Nana Addo Dankwa Akuffo Addo has found itself in a race against time as 4 new cases of Corona Virus have been confirmed in the nation. On Thursday the 12th of March Ghana confirmed its first double case of corona virus which was of two people that came into the country from Norway and Turkey respectively, The person who travelled from Turkey is a citizen of Ghana while local media reports that the other person is a diplomat at the Norwegian embassy in Accra. Both have been in the country for a week.

Before these first cases of Covid 19was reported in Ghana, the Ghanaian president had already declared the governments readiness to map out  100 Million dollars to fight Covid- 19 ,which the Ghanaian Minister of Information Kojo Oppong Nkrumah  followed up on to disclose that the government of Ghana Consolidated Fund and its Donor Partner Fund are the funding source of the $100 Million Dollars   which the Ghanaian government has already started spending in its engagement of combating Corona Virus.

“At my prompting, the Minister for Finance has made available the cedi equivalent of $100 million to enhance our Coronavirus preparedness and response plan. That is to fund the expansion of infrastructure, purchase of materials and equipment and public education,” President Akufo-Addo explained in nationwide broadcast to the nation. 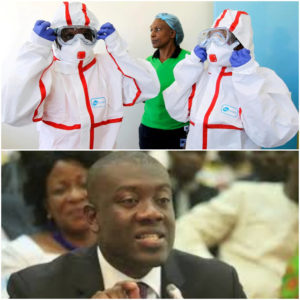 Though members of the opposition met the announcement of $100 Million dollars with mixed reaction but recent events with 4 more cases recorded in less than 2 days ,in which the persons has already been in contact with over 150 other Ghanaians  in the regions of Greater Accra and Kumasi ,has vindicated the presumptions of Nana Addo Dankwa Akuffo Addo for his country to be overzealous in their preparation and readiness.

Now with 4 new cases as of today the 15th of March who are reportedly believed to be responding to treatment followed by the ensued tracking of over 150 people and possibly more that they have gotten in contact with since they entered into the country, the Ghanaian battle with Coronavirus is setting itself up to be a very challenging task and the citizens are alarmed as some schools have stopped classes and events are being cancelled to ensure the containment of further spread of the virus.

The University of Ghana has suspended lectures for graduate students following the confirmation of new cases of Coronavirus in Ghana.  Ashesi University has told its students to stay home as lectures will now be coordinated online for the time being, Ghana First Lady Mrs. Rebecca Akuffo Addo earlier in the week cancelled an international event for women that she was to host over the news of the outbreak

The Director of Public Health at Ghana Health Service, Dr. Badu Sarkodie who provided updates on the country’s cases said the new cases were also imported into the country.

Dr. Badu Sarkodie said, “On Friday, 13th March, 2020 two more cases were confirmed as Covid-19. They reported in two regions. One each from Ashanti Region and the other in the Greater Accra Region.”

“The first is a 56-year old man, a Ghanaian who returned from a trip in the UK on the 4th of March. He stayed in UK for 10 days and came back. He developed symptoms on the 12th of March and reported to a hospital in Obuasi. The case definition met the case of that of suspected Covid-19. Samples were taken and sent to the Kumasi Centre for Collaborative Research in Tropical Medicine (KCCR) and within a short time, the lab reported that this is another confirmed case of Covid-19 within the country.”

“The second is a woman, a Ghanaian student. She travelled out to the USA, stayed there for about 10 days. She came back on the 9th of March and on the 13th of March, started having symptoms…Samples were taken to Noguchi on 13th and the same day, we had a report from Noguchi that confirmed this as another case of Covid-19.”

Both patients have been isolated and being treated.

Dr. Badu Sarkodie announced that the two additional cases were of two Ghanaian males aged 42 and 41 who travelled into the country this month.

In response Ghanaian Government has presented a website to the Ghanaian public where they can constantly visit for official update and happenings on its engagement with the virus.

To further limit the possibility of new imported cases of Covid-19 to the Nation the  Ghanaian Minister of Information Kojo Oppong Nkrumah further disclosed that Government of Ghana is closing its borders to citizens of nations that are already severely hit by Coronavirus.

Travelers from countries with more than 200 cases of Coronavirus will not be allowed into Ghana henceforth to prevent further contagion of the disease from outside the nation, it also asked airlines not to allow travelers from such locations or nations board their flights as they wont allow them entry into their nation. While Ghanaian citizens and resident permit holders coming into the nation will be required to self isolate for 14 days on arrival into Ghana

The Magic of Reincarnation: How Living in Bondage Conquered Again on its Return.

We’re wondering if you’ve considered taking the written content from nigerianeyenewspaper.com and converting it into videos to promote on Youtube? It’s another method of generating traffic.

There’s a free trial available to you at the following link: https://turntextintovideo.com

Hi, We are wondering if you would be interested in our service, where we can provide you with a dofollow link from Amazon (DA 96) back to nigerianeyenewspaper.com?

To explain backlinks, DA and the benefit they have for your website, along with a sample of an existing link, please read here: https://textuploader.com/16jn8

If you’d be interested in learning more, reply to this email but please make sure you include the word INTERESTED in the subject line field, so we can get to your reply sooner.

PS. This does not involve selling anything so you do not need to have a product.

I was looking at some of your articles on this internet site and I believe this site is rattling instructive! Continue putting up.

I simply want to say I am newbie to weblog and absolutely enjoyed your website. More than likely I’m likely to bookmark your blog . You absolutely have remarkable posts. Thanks for sharing your web-site.