Breaking News
Magu, Detained By Police In Abuja For Further...
Ghana Opposition Leader Names Woman as Running Mate...
FashionGHANA Changes The Narrative Of Supporting African Fashion...
Magu was Not Arrested but Invited for Questioning–DSS,...
DSS Arrests Ibrahim Magu the Acting Chairman of...
Hushpuppi and Mr.Woodbery, Welcome to Chicago!
Wike, Atiku, Ihedioha, Kema Chikwe, to Lead PDP...
All Is Set for the Multi Million Dollar...
Thiago Alcantara On his way to Liverpool for...
Tension in Ghana Market Over the Arrest of...
Home Business Fight for Survival: British Airways to Cut 12,000 Workers
Business

The coronavirus (Covid-19) pandemic that has afflicted the United Kingdom and the European mainland has led to an unprecedented decline in international travel, with airlines struggling to keep afloat as demand plummets.

British Airways (BA) could see up to 12,000 jobs losses as a result of the coronavirus crisis, its multinational owner International Consolidated Airlines Group announced on Tuesday.

The Anglo-Spanish holdings company, which also owns Iberia, Aer Lingus, and Vueling, revealed in a statement that its losses are expected to worsen as it enters the second quarter.

A restructuring scheme has been planned for BA after profits took a substantial 535 million euros ($580 million) first-quarter hit, compared to a 135 million profit just a year ago.

“British Airways is formally notifying its trade unions about a proposed restructuring and redundancy programme”, the statement said.

“The proposals remain subject to consultation, but it is likely that they will affect most of British Airways’ employees and may result in the redundancy of up to 12,000 of them.” 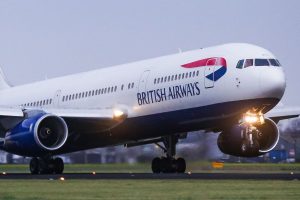 The company says that they do not expect demand to rise to sufficient levels for at least another 5 years.

Alongside the statement by IAG, BA chief executive Alex Cruz wrote a letter directly to staff pledging to “take action” in response to the worsening crisis.

“In the last few weeks, the outlook for the aviation industry has worsened further and we must take action now. We are a strong, well-managed business that has faced into, and overcome, many crises in our hundred-year history”, he said.

Pictures of Turmoil in Ghana Markets as Moves are Made Towards Reopening Locked Nigerian Shops.

I was curious if you ever considered changing the structure of your blog? Its very well written; I love what youve got to say. But maybe you could a little more in the way of content so people could connect with it better. Youve got an awful lot of text for only having 1 or two pictures. Maybe you could space it out better?

I simply want to mention I am just newbie to weblog and honestly savored this web page. More than likely I’m planning to bookmark your blog . You actually come with superb articles and reviews. With thanks for revealing your blog site.