Several NGOs have been raising awareness to condemn the increase of domestic violence during lockdown.

The Federation of Women’s Rights Leagues (FLDF) has said it received 240 phone calls from 230 women who reported incidents of domestic violence during Morocco’s COVID-19 confinement.

FLDF said it received the calls from March 16 to April 24, and a statement from the federation said that a total of 541 acts of violence against the 230 women have been recorded.

Psychological violence had the highest rate, representing 48.2% of the count, followed by economic violence at 33% and physical violence, which exceeded 12%.

The press release added that some women also experienced cases of sexual violence.

The FLDF said it collected data, emphasizing that domestic violence represents 91.7% of all violence during confinement, followed by familial violence (4.4%).

The statement added that the federation provided several services for victims of gender-based violence during this period. FLDF supported the victims with 492 actions, including listening, counseling, and offering psychological support.

Other services included intervention, coordination, and cooperation with various institutional actors to empower women through providing accommodations and through raising awareness and urging regional and national solidarity.

The federation urged any concerned parties to intervene to prevent any aggravation of violence against women and to strengthen measures taken in this area. 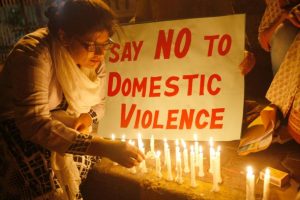 Scores of NGOs and associations have been alerting the world of the global increase in violence against women.

In a press release last week, the seat of the Moroccan #MeToo movement, the Masaktach (I will not be silent) Collective, invited women to continue to speak up against domestic violence.

Acknowledging an alarming increase of domestic violence during lockdown, the collective said that the campaign aims to give a voice to women in Morocco “whose responsibilities, mental load, and suffering have been increased.”

“You can also directly post your testimonies through the use of the hashtag #3yalat_El7ajr_Si77i (women of lockdown), which we will publish on our digital platforms,” the collective added.

Statistics On Rape and Incest: Why Anambra People Deserves an Apology from Punch Newspaper.

We stumbled over here by a different web page and thought I may as well check things out. I like what I see so now i am following you. Look forward to looking at your web page for a second time.

Statistics On Rape and Incest: Why...