Breaking News
Magu, Detained By Police In Abuja For Further...
Ghana Opposition Leader Names Woman as Running Mate...
FashionGHANA Changes The Narrative Of Supporting African Fashion...
Magu was Not Arrested but Invited for Questioning–DSS,...
DSS Arrests Ibrahim Magu the Acting Chairman of...
Hushpuppi and Mr.Woodbery, Welcome to Chicago!
Wike, Atiku, Ihedioha, Kema Chikwe, to Lead PDP...
All Is Set for the Multi Million Dollar...
Thiago Alcantara On his way to Liverpool for...
Tension in Ghana Market Over the Arrest of...
Home Sports Angela Merkel Confirms Bundesliga’s Restart this May
Sports

The Bundesliga will return in the second half of May after Germany’s Chancellor Angela Merkel rubber-stamped its return on Wednesday.  ​

Germany’s top league – which was suspended in mid-March – is set to become the first of Europe’s top five leagues to initiate a restart since the outbreak of the coronavirus pandemic; matches will be played behind closed doors as expected.

While neighbours France and Portugal have already terminated their respective leagues, there have been significantly fewer reported deaths in Germany, while testing capabilities have been relatively high from the onset. 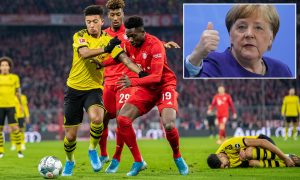 Bundesliga bosses to earmark a specific date for football to return in Germany. On Monday, the German Football League revealed 1,724 tests had been carried out on players and staff between the top two tiers of football.

Ten positive tests were reported, and in a second round of testing three staff members from second division side Erzgebirge Aue tested positive, leading to the entire squad being placed into self-isolation.

With the Bundesliga set to return the final nine games of the season can now be played. Bayern Munich sit four points clear of Borussia Dortmund in first place as things stand. Bayer Leverkusen are also just two points behind Borussia Monchengladbach in fourth, while a fight to beat the drop also remains, just four points separating Werder Bremen and Fortuna Dusseldorf in 15th and 16th respectively.

I¦ve recently started a site, the information you offer on this web site has helped me tremendously. Thanks for all of your time & work.

I simply want to tell you that I am just beginner to blogging and site-building and actually loved you’re website. Very likely I’m likely to bookmark your blog . You surely come with wonderful writings. Thanks a bunch for sharing with us your web page.

Thiago Alcantara On his way to...

Neymar’s Mum Dating the Ex-lover of...