Breaking News
Ogelle Signs Creative Content Pact with Trinidad and...
Champions League is back and Journey to the...
Magu, Detained By Police In Abuja For Further...
Ghana Opposition Leader Names Woman as Running Mate...
FashionGHANA Changes The Narrative Of Supporting African Fashion...
Magu was Not Arrested but Invited for Questioning–DSS,...
DSS Arrests Ibrahim Magu the Acting Chairman of...
Hushpuppi and Mr.Woodbery, Welcome to Chicago!
Wike, Atiku, Ihedioha, Kema Chikwe, to Lead PDP...
All Is Set for the Multi Million Dollar...
Home Featured Tension as petrol tanker spills content at Niger bridge
Featured

A petrol tanker has reportedly spilled its contents at the River Niger bridge, Onitsha Anambra state.

The truck was said to have hit the edge rail of the bridge while attempting to make a U-turn on the bridge. 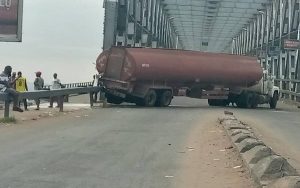 He said: “A petrol tanker has  just hit the edge rail while attempting to make a U-turn on the River Niger bridge.

“Fuel from the tanker is spilling furiously. The Fire Service have been contacted and they are on their way to the scene. FRSC operatives are currently controlling traffic

In times like these,the people comes first,that’s what democracy is all about –Engr. Francis Njoku

Covid-19 Lockdown and Your Rights: Deconstructing the Friction between the People and the Government.

I’m impressed, I need to say. Actually hardly ever do I encounter a blog that’s each educative and entertaining, and let me tell you, you may have hit the nail on the head. Your idea is excellent; the difficulty is one thing that not sufficient persons are speaking intelligently about. I’m very glad that I stumbled across this in my seek for something referring to this.

Africa, A Victim of Fake News...

Clash of Egos: Tacha and Mercy...

Vendetta or Good Governance:The Casualties of...