With this endorsement, Omondi, who has created countless exciting and compelling comedy series out of Kenya and other East African countries, has become Ogelle’s latest ambassador content creator.

Both Eric Omondi and the Ogelle.com management say they are excited to work together.

“I’m excited to be part of the Ogelle journey, most especially because Ogelle is African,” the entertainment guru said.

Omondi, who prides himself as “President of Comedy Africa”, has a combined online following of over 10 million and more than 60 million views. On Instagram alone, he has 2.6 million followers, and 381,000 subscribers on YouTube. 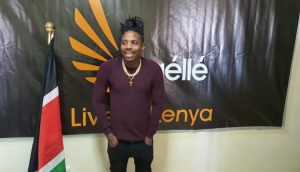 Osita Oparaugo, CEO of Reddot Television Network, the parent company of Ogelle, said the company was equally excited to have the entertainer on the Ogelle journey mainly for two reasons.

“First, he has created deep-rooted African content that will help to change the African narrative, and secondly, because we know he will help galvanise the right support for other Kenyan and East African content creators,” Oparaugo said.

Ogelle, which was launched in Lagos in April 2019, has recorded impressive acceptance since then, not just from users in Nigeria but all over Africa and globally.

With over 10,000 videos from 7,809 African content creators, millions of views and a combined app downloads of over 40,000, the management of Ogelle say they are proud that truly, Ogelle is African.

Clarisse Karasira, an amazing singer from Rwanda who sings in Kinyarwanda and who is also a great advocate for youth development, is one of its ambassador content creators.

To further deepen its footprint across Africa and globally, Reddot Television Network went on locations across Lagos last year to produce Ogelle’s flagship movie, ‘Aluko’s Residence’. The web series premiered at the Genesis Cinema, The Palms, Lagos on March 8. Every Monday since then, a new episode of the series has been released online exclusively on www.ogelle.com.

In September last year, Ogelle entered into a content creation and sharing agreement with Bamenya Series Group, one of the most-watched online comedy series from East Africa with 17.3 million views in less than one year.

The agreement, Oparaugo said then, would ensure that Swahili- and Kinyarwanda-speaking people all over the world find their home on Ogelle.

“Entertainment content creators in Africa, no matter the language they speak, must embrace the fact that we are major players in content creation and have a voice that must be heard on global digital scale, hence we developed Ogelle,” he said.

Just in March this year, on the eve of his 83rd birthday, former President Olusegun Obasanjo commended the management of Ogelle.com for creating a platform dedicated to the promotion of African content only.

“What you have created is huge, focus is right and there’s content all over Africa, just the medium for promotion and distribution is what our youths need to excel. I thank you for creating this and coming to present it to me,” Obasanjo said when the Ogelle team, led by Oparaugo, paid him a visit in Ota, Ogun State.

What Ex President Obasanjo Said About Ogelle.com and Economic Opportunity it presents to African Youths

I just could not depart your website prior to suggesting that I extremely enjoyed the standard info a person provide for your visitors? Is going to be back often in order to check up on new posts