Breaking News
Ogelle Signs Creative Content Pact with Trinidad and...
Champions League is back and Journey to the...
Magu, Detained By Police In Abuja For Further...
Ghana Opposition Leader Names Woman as Running Mate...
FashionGHANA Changes The Narrative Of Supporting African Fashion...
Magu was Not Arrested but Invited for Questioning–DSS,...
DSS Arrests Ibrahim Magu the Acting Chairman of...
Hushpuppi and Mr.Woodbery, Welcome to Chicago!
Wike, Atiku, Ihedioha, Kema Chikwe, to Lead PDP...
All Is Set for the Multi Million Dollar...
Home Featured Vendetta or Good Governance:The Casualties of Repealed Law on Pension for Ex Governors, in Imo State.
FeaturedPolitics

Almost everyone from the south eastern state of Imo received the news of Governor Hope Uzodinma signing an executive bill repealing the law that instituted pension allowances and gratuities for former governors, deputy governors, speakers, and deputy speakers of the State with great joy.

They believe it a positive step towards saving funds for the state especially with the expected recession of the economy hinged on the impact of the covid-19 pandemic on the globe as economic activities were put to almost a total halt in the last few months.

Explaining his perspective to the issue after assenting to the bill at the Sam Mbakwe Exco Chamber, in the Government House. Governor Uzodinma affirmed that a repeal of the law has become necessary as it is in contrary to the 1999 Constitution as amended. He said the constitution stipulated that a pensioner must have worked for at least 10 years and must be up to 45 years of age.

The governor stated, “Apart from the inconsistency of such a law to the provisions of the ground norm, which is the constitution of 1999 (as amended), this has led, for a very long time, to a precedent that does not encourage diligence and prudence in service delivery.”

He regretted a situation where some of the beneficiaries of the payments equally got huge amounts of money as salaries and allowances in other positions they occupied.

Some political pundits in the state are seeing this achievement from another perspective in the sense that this is a calculated move to dis-empower the main opposition to the seat of governance in the state come 2024. 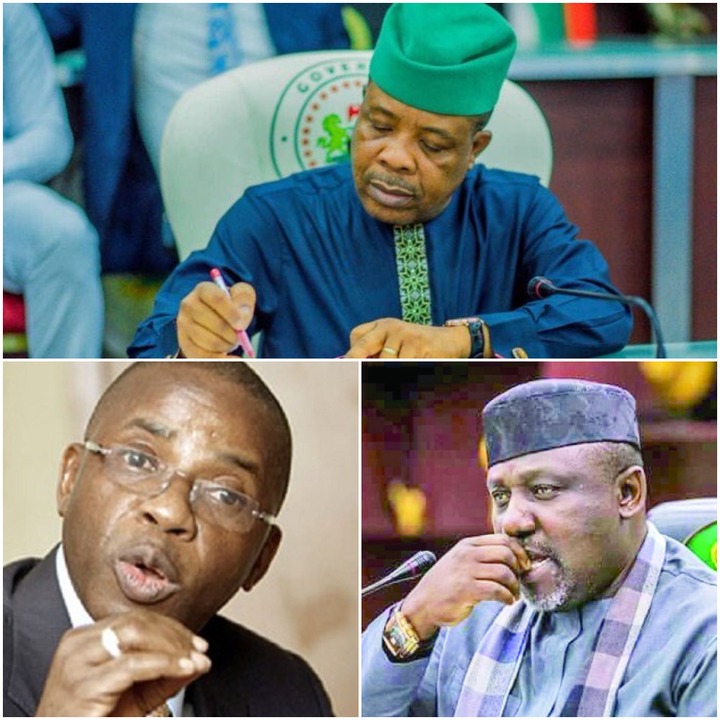 When Okorocha was Governor of Imo State he refrain from paying Ex Governor Ikedi Ohakim his pension and gratuities some believe it is to suffocate his efforts towards re-contesting the guber seat against him as Ohakim had done only one tenure and is eligible for another aim at the seat of government in the state.

There are speculated theories in the state that Gov. Hope Uzodinma following his controversial emergence as Governor through the judiciary, is wary of drawing further negative attention to himself and is bent on ensuring the right things are done and the perceived best way to legally cripple his opponents financially is to deny them access to the coffers of the state ,because their pension and gratuities etc are estimated to run into billions of naira and is enough to sustain them and keep them in good shape till 2024.

Senator Rochas Okorocha a former Governor of the State is now at the Red Chamber and is perceived to be happy over his loss of the dream of having his Son in- law at the Imo Government house, and following the appointments Uzodinma had made so far which seems not to have favoured his own section of the APC party in the state, he might be strategizing of his Son-in –law re contesting for that seat in 2024 so denying him access to further funds from the State purse will assist no matter how little in making his plans for 2024 a bit more difficult.

With the controversial exit of Hon.Emeka Ihedioha as the Governor of the State early this year, we are not in the know if he is eligible to this gratuities and pensions as former Governor of the State , though it may seem unlikely but if he is, then it means this repealed law will hit him hardest as he has a long wait till 2024 to make another bid for the number one seat in Imo State. 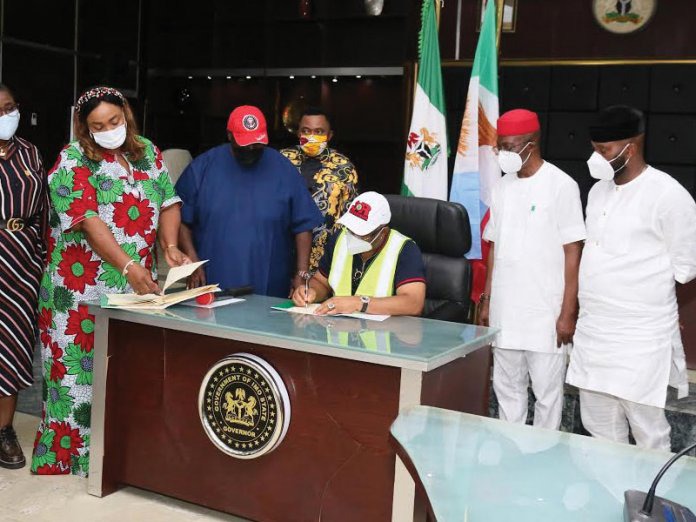 Last but not the least Ex Governor Ikedi Ohakim, ruled Imo for only 4 years between 2007 and 2011, and is constitutionally eligible to contest in 2024, he was reintroduced in the affairs of the State during Emeka Ihedioha’s short stint as Governor and he has been in the race for every guber election since he lost to Rochas Okorocha in 2011.

Gov. Ohakim has not won any election since he lost his second term bid and it’s likely that the gratuities and pensions from the state coffers is a very good means of sustainability for him, but now that is not to be, with this new development, his dream of ever becoming the governor of the state again is looking more bleak.

The fact remains that the steps taken by the current Imo Legislators in the State by proposing the repealing of the law and the Governor affirming their decision is a huge step forward for Imo People and the economy of the State, as funds that would have gone to this ex governor’s pocket will trickle into executing projects that will generally improve the welfare of Imo people.

Governor Hope Uzodinma has gotten it right this time whether it’s for vendetta or for the love of the people, because almost everyone in Imo is happy for this development , we think that with similar actions as this the Governor will finally find his way back into the hearts of his kinsmen to win back their entire affection and support.

Hi there would you mind letting me know which web host you’re utilizing? I’ve loaded your blog in 3 different web browsers and I must say this blog loads a lot quicker then most. Can you suggest a good internet hosting provider at a reasonable price? Thanks a lot, I appreciate it!