Breaking News
Ogelle Signs Creative Content Pact with Trinidad and...
Champions League is back and Journey to the...
Magu, Detained By Police In Abuja For Further...
Ghana Opposition Leader Names Woman as Running Mate...
FashionGHANA Changes The Narrative Of Supporting African Fashion...
Magu was Not Arrested but Invited for Questioning–DSS,...
DSS Arrests Ibrahim Magu the Acting Chairman of...
Hushpuppi and Mr.Woodbery, Welcome to Chicago!
Wike, Atiku, Ihedioha, Kema Chikwe, to Lead PDP...
All Is Set for the Multi Million Dollar...
Home Entertainment Clash of Egos: Tacha and Mercy ’s Beef to likely Continue at the Big Brother Naija Reunion Show
EntertainmentFeatured

One of the benefits of the Covid-pandemic lock-down is that it gave lots of people the opportunity of taking some time off from their everyday hustle, in a way that they never thought possible. Couples that barely spend more than 10 hours together in a day the whole full year except on weekends and public holidays saw themselves spending 24hours of the whole  7 days in a week together.

During this lockdown Pay TV and online activities thrived the most, as people sought for a way out from the boredom of not living life the way they are used to, not being at their businesses or in school, without any social activity, soccer, concerts, seminar including worship rituals like going to church on Sunday or the mosque on a Friday.

The recent ease on certain restrictions of the nation-wide lockdown, has made it possible for most people to be at their places of work in Nigeria, and has helped a little in believing that the return to normalcy is not too far off and the recent announcement of the coming of Big Brother Naija (BBN) Pepper dem Gang ‘Reunion’ show, has elicited excitement to the fans and followers of the program.

The Reunion show of the BBN has become like a tradition of the controversial reality TV show rated 18+, it has consistently taken place before the beginning of any new edition of the show, so it’s like the organisers see it as pivotal and a strategic way to  whet  the  appetite of the show lovers by reminding them of what was in order to make them expectant of  what is to come.

The reunion show always have most or the entire participants of the previous edition of the BBN back together, to evaluate how life has been treating them post the show, it offers opportunity for closing out some loose ends and ironing out some pending issues that were not resolved in the house via evictions during the show and both Tacha and Mercy has been confirmed to participate in it.

One of the biggest highlights of last year’s pepper dem gang edition was the eviction of Tacha from the house following a debacle with Mercy Eke who eventually won the show with a record of being the first woman to do so in the history of the reality show in Nigeria.

After the big brother show Tacha and Mercy Eke has continuously thrown shades at each other,  their  fans  has remain eternally divided over who is the most beautiful or classy of the two, thereby  fueling the beef between the two former housemates on social media.

A scenario likened to the situation of the endless debate over who is the best soccer player in the world, which Cristiano Ronald and Lionel Messi has found themselves for their exceptional skills of the game, Tacha and Mercy has become the pawns at the hands of their fans and followers, whose insatiable desire to decide for other Nigerian’s that their beloved of the two  is the true best has taken over their cogent abilities.

The organisers of the show knows the worth of the sensation between the fans of Tacha and Mercy Eke and the ratings it attracts to the show, it’s very possible that this edition of the Reunion will likely draw more viewers than the previous editions following the consternation between the two ladies. 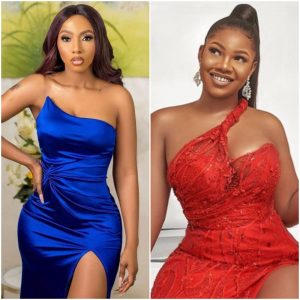 The fans and followers of this two alpha female will be filled with the desire to see their outfits, make up, hair and most importantly their facial reactions when they meet each other in such a close encounter again after almost a year.

Already Tacha and Mercy are embroiled in a new dispute, as the two are seemingly throwing shades at each other on instagram and their fans have been savagely going at each other on Twitter and other social media portals.

This new debacle began with Tacha releasing a video to defend her friend and former housemate, Khafi. She addressed the people who call Khafi names such as “gossip” and “two-faced”, and questioned if they are saints.

With this ne development between the two, it seems very unlikely that Tacha and Mercy Eke are going to smile, hug and pat each other at the back in solidarity saying “let bygone be bygone”, when they meet at the Reunion.

Though we doubt if there is ever going to be another heated debate between the two as it happened in the house before Tacha was disqualified in the BBN, but one can never  tell the emotions and anger that is likely to be  ignited from probing questions into events at the house that led to the elimination of Tacha.

We are not expecting an end to this beef between the two anytime soon, and them knowing that they are about to take the back seat with the coming of the 2020 edition, this two might have an ace up their sleeve towards exploiting all the possible publicity their wild actions can draw to them at this Reunion, because the curtain is closing in on their reign as BBN hot shots.

Whichever way it goes the major players of the new media and influencers are going to be on alert for an opportunity of  raking  in views and likes to their posts on analysis of the epic faceoff  between Tacha and Mercy that the reunion will present  once more.

Regardless of all the possibilities, It is very likely that the two are going to act normal at the Reunion, in order not to draw more negative attention to the brands they are trying to build, besides there is no need for multi choice and their partners  hinging extra hype on the coming BBN Show on this two as they are not likely to be part of the 2020 edition of the Reality program.