Breaking News
Magu, Detained By Police In Abuja For Further...
Ghana Opposition Leader Names Woman as Running Mate...
FashionGHANA Changes The Narrative Of Supporting African Fashion...
Magu was Not Arrested but Invited for Questioning–DSS,...
DSS Arrests Ibrahim Magu the Acting Chairman of...
Hushpuppi and Mr.Woodbery, Welcome to Chicago!
Wike, Atiku, Ihedioha, Kema Chikwe, to Lead PDP...
All Is Set for the Multi Million Dollar...
Thiago Alcantara On his way to Liverpool for...
Tension in Ghana Market Over the Arrest of...
Home Sports Chelsea ‘agree £54m deal To Sign Timo Werner’
Sports

The Germany international has been in stunning form for his Bundesliga club during the 2019-20 campaign, scoring 31 times and providing 12 assists in 40 appearances in all competitions.

Liverpool were thought to be the favourites for the 24-year-old, who is believed to have a €60m (£54m) release clause in his current deal at the Red Bull Arena. 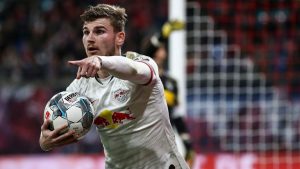 However, according to Bild, the striker has now agreed a five-year contract with Chelsea worth £9m a year.

The report claims that Werner decided in March that he wanted to leave Leipzig this summer and after the interest from Liverpool cooled, Frank Lampard‘s side made their move.

Manchester United have also been linked with the German, who has struck 92 times in 154 appearances for his current side since arriving from Stuttgart in 2016.

However, it appears that Chelsea, who are currently fourth in the Premier League table, have won the race for the attacker after agreeing to meet the buy-out figure in his contract.

America is Sick- I Can’t Breathe

Thiago Alcantara On his way to...

Neymar’s Mum Dating the Ex-lover of...