Breaking News
Magu, Detained By Police In Abuja For Further...
Ghana Opposition Leader Names Woman as Running Mate...
FashionGHANA Changes The Narrative Of Supporting African Fashion...
Magu was Not Arrested but Invited for Questioning–DSS,...
DSS Arrests Ibrahim Magu the Acting Chairman of...
Hushpuppi and Mr.Woodbery, Welcome to Chicago!
Wike, Atiku, Ihedioha, Kema Chikwe, to Lead PDP...
All Is Set for the Multi Million Dollar...
Thiago Alcantara On his way to Liverpool for...
Tension in Ghana Market Over the Arrest of...
Home Politics Fake News: Imo Magistrate Court Arraigns the State’s PDP’s New Media D.G for Misinforming the Public
Politics

Mr.Ambrose Nwaogwugwu, the Director General of New Media for the Peoples Democratic Party in Imo, was today arraigned at the Magistrate Court in the state for dissemination of fake news, misinforming the public, and defaming the person of Senator Hope Uzodinma the Governor of Imo State.

The 29year old member of the PDP in Imo State, was arraigned on a 7 Count Charge today in the state, he was alleged to be behind the recent fake news circulated via Facebook and other mushroom media platforms to discredit the person, and office of the Imo State Governor. 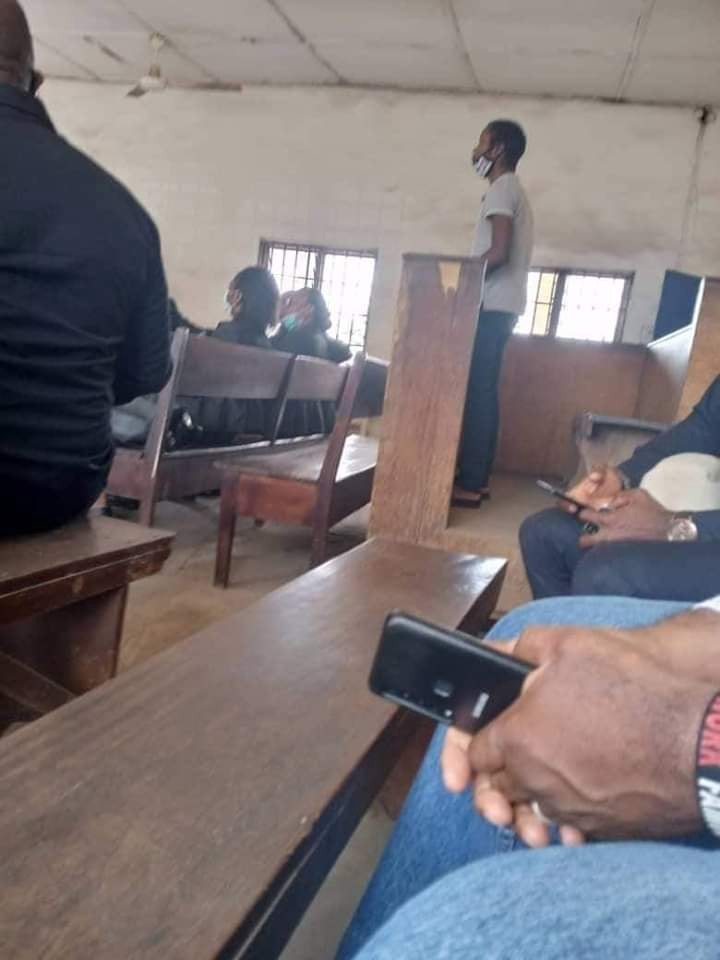 Count 1 accused him of publishing a defamatory story on Facebook on the 22nd May 2020, alleging that the Imo Governor wants to loot 5.2 Billion Naira Gratuity of Imo former Governors, knowing that its false, yet he went ahead to disseminate it in a public domain just to tarnish the governors image, which is a criminal offence under section 375 of the Criminal Code, Cap.30 Vol II Laws of the Eastern Nigeria.

He was also accused of peddling false information, publicly stating that Governor Hope Uzodinma established 15 Almajiri Schools in the State on 26th May 2020, for Count 2.

Count 3 in his charge sheet was built on the premise that he publicized a fake information on 20th April 2020, in which he publicly stated that Governor Hope Uzodinma was to rename the Imo State University to Abba Kyari University for helping him out in the supreme court during the guber election trials between Hope and Former Governor Emeka Ihedioha.

Count 5 accused of lying to the public that the Gov. Hope Uzodinma has ordered his SSA on Student Affairs Hon. Franklyn Oparaji to kill him (Mr.Ambrose) which is a threat to the reputation of the Imo Governor. 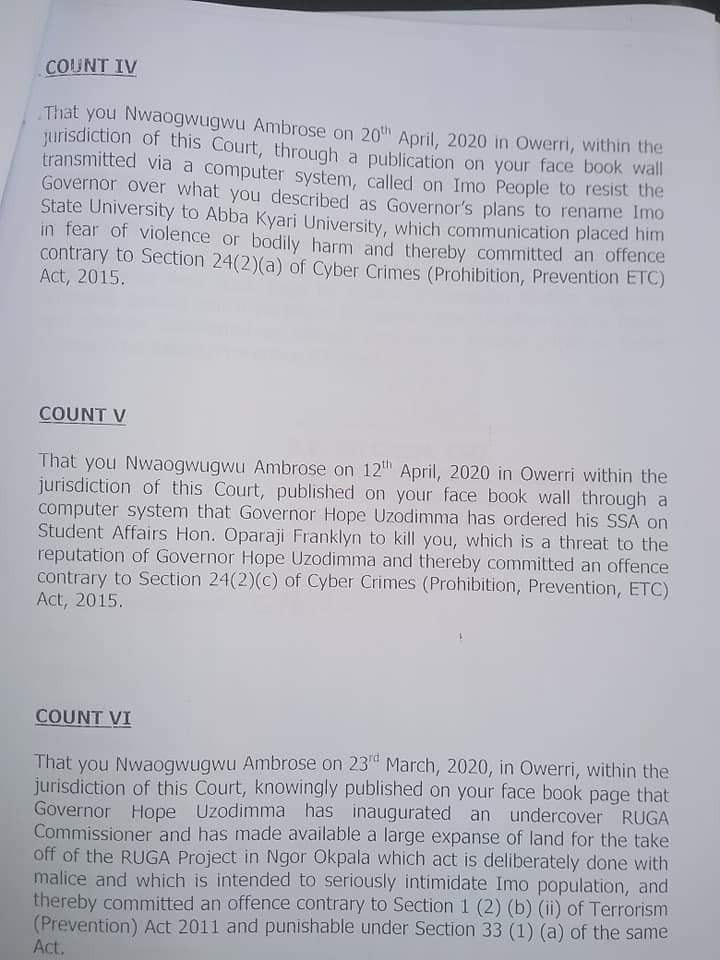 The 6th Count accused Mr.Ambrose that he lied against the person and office of Imo Governor by publicly disseminating a fake information, stating  that the Imo State Governor has inaugurated an undercover RUGA Commissioner, and has made available a large expanse of land for the take off of RUGA project in Ngor Okpala LGA of the State, which the court adjudged as being deliberately done with malice and with the intention to seriously intimidate the entire Imo population.

Mr.Ambrose was remanded in custody for further hearing on the case on June 16th, as he pleaded not guilty to the charges which was read to him at the magistrate court in the state.

In recent times Imo State has witnessed a high surge of cyber criminality that has resulted in great distortion of facts, promotion of ill-will and attendant manipulation of citizens against themselves, and against Government, almost resulting in massive incitement of Imo people against Imo State government. 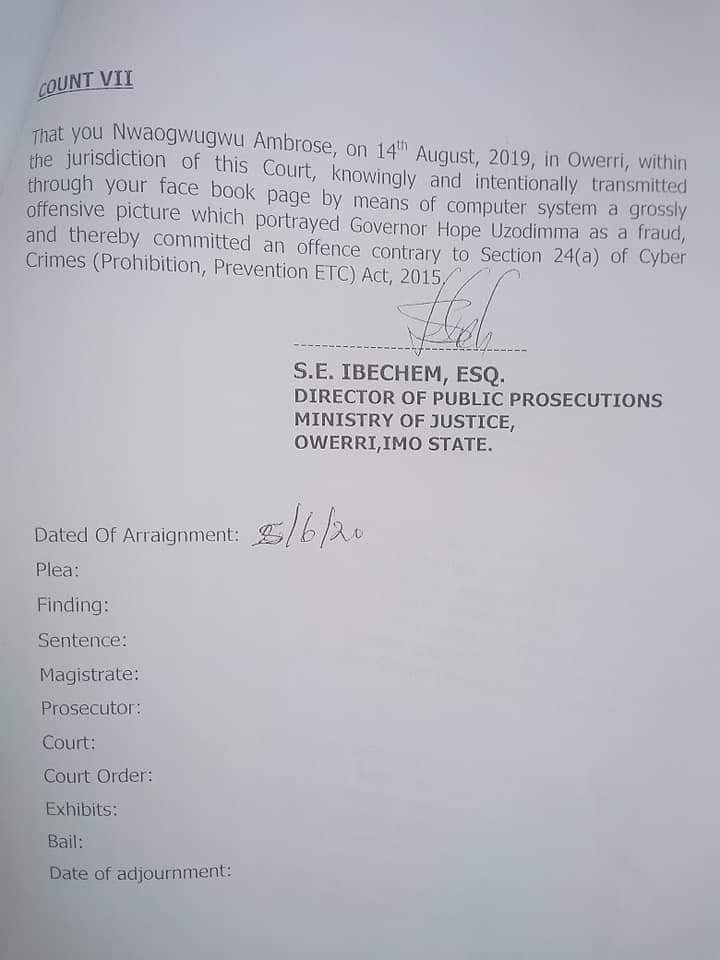 Mr.  Ambrose is known to be passionate with the job of his office, and some Imo people believes that he was used as a tool for dissemination of the propaganda to deface the activities and efforts of the APC led government in the state, and that it’s likely that he wasn’t even the person churning out the image smearing attacks on Imo Governor which he ignorantly spearheaded with his facebook account.

The 21st Century came with a higher dimension of internet and cyber crime that most often than not engender societal menace which includes blackmailing, libel, slander, cyber bullying and treason to mention just a few, the Government of the day in Nigeria are not mincing words with their efforts towards stemming the tide of fake news.

Tears in Abia ,as 21 year Old Girl allegedly killed by Herdsmen in Imo is Being Buried Today

I simply want to mention I am just all new to weblog and seriously liked your blog site. More than likely I’m want to bookmark your blog . You certainly come with terrific well written articles. Thanks a bunch for sharing your web site.