Breaking News
Magu, Detained By Police In Abuja For Further...
Ghana Opposition Leader Names Woman as Running Mate...
FashionGHANA Changes The Narrative Of Supporting African Fashion...
Magu was Not Arrested but Invited for Questioning–DSS,...
DSS Arrests Ibrahim Magu the Acting Chairman of...
Hushpuppi and Mr.Woodbery, Welcome to Chicago!
Wike, Atiku, Ihedioha, Kema Chikwe, to Lead PDP...
All Is Set for the Multi Million Dollar...
Thiago Alcantara On his way to Liverpool for...
Tension in Ghana Market Over the Arrest of...
Home Politics Unknown Gunmen Invades Nigeria’s Diplomatic Property and Demolish Projects worth Millions of Naira
Politics

Speculation has been rife over the real reason, and the possible identity of the people behind the demolition of about 4 housing project of the Nigerian High Commission in Ghana, late in the night around 11PM on Friday the 19th of July 2020.

The properties which are already at the last stage of its development as they have been roofed are believed to be situated right inside the high commission staff quarters, which is situated at the back of the official residence of Nigerian High Commission in the  Ridge area of Accra, the capital city of Ghana.

Nigerians in Ghana are wondering the reasons behind such an action, and who could wield such power to take this action that is capable of straining the bilateral relationship of Nigeria and Ghana as it has caused an international embarrassment to Nigeria. 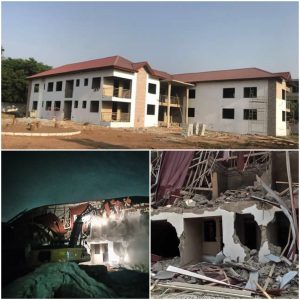 Is this action influenced by a court judgement?  Is the building being built on a waterway? If yes then who gave the approval before the construction of the houses began? These are some of the questions running riot in social media platforms of Nigerian communities and associations in Ghana.

A respectable diplomatic agency like the Nigerian High Commission must undertake thorough research before embarking on a building project in another nation, and are likely not to make the mistake of building on water ways most summarized over the awful speculation.

The High commission has urgently called for a stakeholders meeting between it and the important voices in the Nigerian Community in Ghana, but no information regarding the outcome of the meeting has been made public ,and the Nigerian Diplomatic Mission in Ghana is yet to release a public statement regarding the incident. Nigerians in Ghana believes that there are signs of  diplomatic row underneath the entire incident, as an eye witness that recounted what transpired,  disclosed that the staff of the High Commission who were present during the demolition made calls to the Ridge Police Station which is situated right around the corner  but they delayed to respond till about an hour.

When the police finally arrived ,they had a brief discussion with the leader of the team that supervised the demolition of the project ,and left the scene in about 5 minutes without questioning or arresting any of the unknown gun men that accompanied the demolition team.

Now this is the second time in the past 7 months  that situations relating to properties of the Nigerian diplomatic mission in Ghana has been mismanaged , the last time it was the seemingly forceful eviction of the commission from one of its residence on number 10 Barnes road, which it is believed that Ghana govt  forcefully reallocated the property to Amaco Microfinance without proper agreement over such transfer with the high commission or Nigerian foreign affairs ministry.

Ghana’s Ministry of Foreign Affairs claims that Nigerian Government failed to renew the property following expiration thus, “the property reverted to the state in compliance with Article 258 of Ghana’s 1992 Constitution.”

However, Mr Femi Abikoye the then Nigerian High Commissioner to Ghana expressed surprise that the reallocation was done “ without recourse to the High Commission” despite having requested severally for “a mutual resolution of the matter, affirming that Nigerian Government is examining the situation and that an appropriate directive was being awaited.”   That was the last we heard of the situation.

Now the latest incident has been taken a mile further by demolishing of almost fully completed buildings being erected by the Nigerian diplomatic missions. This project is very likely to be funded by tax payer’s money, and of course approved by the foreign affairs ministry of Nigeria.

With closure of Nigerian shops in Ghana, forceful eviction and reallocation of a property rented by the High Commission and now demolition of almost ready building projects in a supposed Nigerian territory in Ghana, these are sure signs that the bilateral relationship between Nigeria and Ghana is under heavy strain at this time.