Breaking News
Magu, Detained By Police In Abuja For Further...
Ghana Opposition Leader Names Woman as Running Mate...
FashionGHANA Changes The Narrative Of Supporting African Fashion...
Magu was Not Arrested but Invited for Questioning–DSS,...
DSS Arrests Ibrahim Magu the Acting Chairman of...
Hushpuppi and Mr.Woodbery, Welcome to Chicago!
Wike, Atiku, Ihedioha, Kema Chikwe, to Lead PDP...
All Is Set for the Multi Million Dollar...
Thiago Alcantara On his way to Liverpool for...
Tension in Ghana Market Over the Arrest of...
Home Business ECOWAS Endorses Okonjo-Iweala for DG WTO- Solicits Africa, Others’ Support
Business

Indication has emerged that the Heads of State and Governments of the 15 Economic Community of West African States (ECOWAS) have thrown their weight behind the candidature of Nigeria’s two-term former minister and erstwhile Managing Director (Operations) of the World Bank, Dr. Ngozi Okonjo-Iweala, for the position of the Director General of the World Trade Organisation (WTO).

The West African leaders’ position was made  known in a statement signed by President of Niger, Mahamadou Issoufou, who doubles as ECOWAS President. 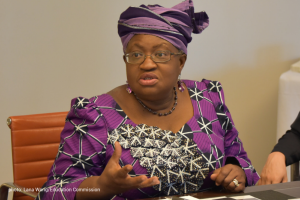 “Since the creation of the WTO on January 1, 1995, which is a successor to the General Agreement on Tariff and Trade (GATT) established on January 1, 1948, no African has assumed the position of Director-General of the organisation,” the leaders argued.

Pictures of Turmoil in Ghana Markets as Moves are Made Towards Reopening Locked Nigerian Shops.