In a show of compliance to the Social distancing regulations prompted by the covid-19 pandemic, UEFA held their Quarterfinals Champions League draw that will culminate to the semi final and final draw virtually.

The Soccer competition will be completed in Portugal in a 12 day of champion’s league football. Meanwhile prior to the commencement of the competition Quarter finals, the remaining round of 16 matches between Real Madrid and Manchester city , Lyon against Juventus and Chelsea against Bayern Munich will be played on the 7th of August. 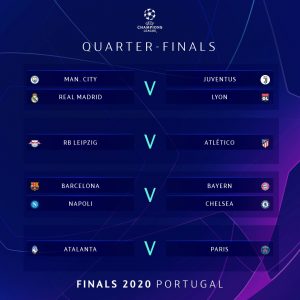 Here is the complete draw.

And here’s how the semi-finals will stack up. Potential for an all-English tie, although Chelsea have a mountain to climb.

The winner of Semi-final 2 will be the ‘home’ team for the final which will be played on the 23rd August 2020 (although it will be at a neutral venue).

Footballer’s ex-girlfriend found dead one week after their breakup

Twice as Tough:Double Bout Deal Agreed between Joshua and Fury this 2021.

Serena Williams Comes Short of Her Most Elusive Dream Again

Everything you need to know of today’s Champions League Final