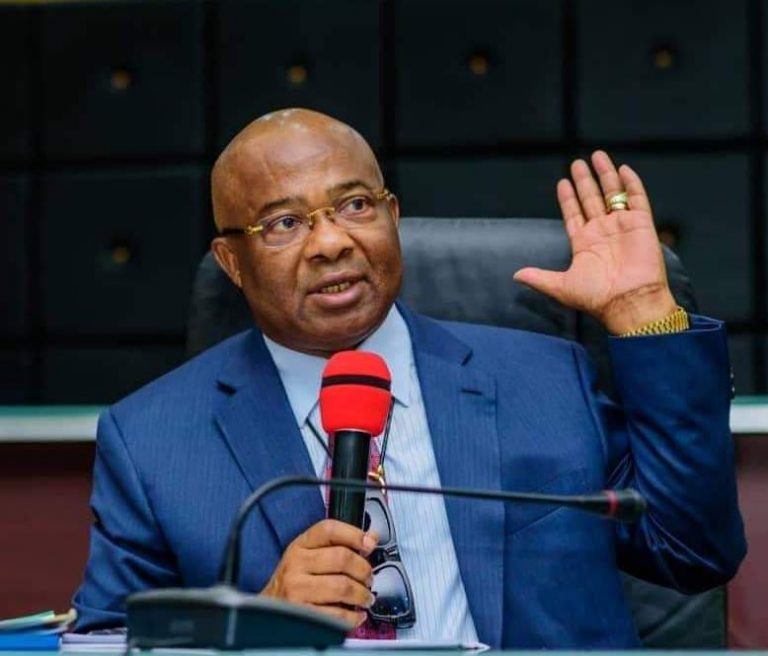 When the Supreme Court announced him as Governor of Imo State, many wondered what Governor Hope Uzodinma has in the kitty for the people of Imo State in terms of good governance. The Orlu born politician was fresh from his numerous battles with Rochas Okorocha and then the legal battles with former Governor Ihedioha led to a number of question marks on what he had to offer to Ndi Imo. Most of those questions have now been answered in the affirmative to the amazement of the doubting thomases.

Governor Uzodinma is passionate about the infrastructural development of all parts of Imo.

According to the Special Adviser to the Governor on Project Monitoring Okigwe Zone Hon. Engr. Francis Chukwu has given an assurance of the determination of the present administration led by the Governor Uzodinma to bring about massive infrastructural development across all the nooks and crannies of the state.

He made this known while addressing stakeholders at Ihitte/Uboma LGA headquarters Isinweke during his maiden Project assessment visit to the area. Hon. Engr. Chukwu maintained that the Governor Uzodinma has come to bestow on Imolites standard structures and legacy projects, stressing that the award of contract for the reconstruction of Owerri-Okigwe road to a renowned Company like Julius Berger was borne out of the Governor’s love for quality and durable projects.

The Special Adviser to the Governor who appealed to the people to be patient with the Shared Prosperity government that has been in office for few months, added that in no distant time the people of the area and the state in General will further enjoy the development plans of Governor Uzodinma.

Responding, the IMC Chairman of Ihitte/Uboma LGA Hon. Chike Olemgbe represented by the Director of Administration and General Services of the Council Mr. Evarest Ibe appreciated the S.A to the Governor on Project Monitoring Okigwe Zone for his visit to the area and assured him of their maximum support to the Governor and the cooperation of the LGA to ensure the realization of his aim of coming to the area.

The Chairman of Ihitte/Uboma Council of Traditional Rulers and other notable Traditional Rulers who spoke on the occasion called for attention on roads and other social amenities in the area. They emphasized the need for the Abadaba Lake Resort Project to be revamped adding that when actualized it will boost the Tourism Industry of the state and further generate revenue for the government.

Governor Uzodinma spoke recently through the State Commissioner for Environment, Dr. Ikay Njoku, at a ceremony by the CDBs to present cheques to community contractors for the third milestone for the over N360 million social investment projects designed to benefit people of the host communities.

“I commend the Assa North and Ohaji Egbema Cluster Development Boards as well as their community contractors for doing good jobs so far. The Imo State Government will continue to monitor project execution to ensure that contractors do not lower the quality and standard of the jobs. We will have zero tolerance for corruption,” he said.

Chairman of Assa North CDB, Mr. Godswill Uzomba Uho, and his counterpart for the Ohaji/Egbema CDB, Mr. Casmir Ekeruo, pledged to “continue to monitor the community contractors to ensure that the right standards are maintained for their people”.

Adekoya, represented by SPDC’s Community Interface and Social Performance Adviser, Mr. Victor Alimele, added, “The gas development project in Imo State is one of the priority projects of the Federal Government of Nigeria because its development will help the government deliver on its ambition to provide enough gas for domestic consumption, power generation and gas-based ammonia and urea fertilizers for farmers.”

“The Assa North Gas Development Project will be a major game-changer in our country’s quest for energy sufficiency and economic growth and, once again, it emphasizes Shell’s unshaken commitment to Nigeria both now and in the future,” he said.

“The project has the potential to be one of the largest domestic gas projects in the country when completed”, Adekoya noted. When completed the Assa North Gas project will produce 600 million standard cubic feet of gas per day (mscf/d) from its upstream facilities and process 300mscf/d from the SPDC gas facility under construction to boost domestic gas supply for power generation and general industrialization.

The Cluster Development Board implements SPDC’s Global Memorandum of Understanding for delivering sustainable development projects in the host communities.

Rehabilitation and Recovery of the Civil Service Commission. To and fro Free transit buses for civil servants in the state; Reconstruction of IMSUTH Infrastructure; brand new Toyota SUVs donated to judges in Imo state; Mobile Clinic donated to all 27 LGAs for primary healthcare services among others.