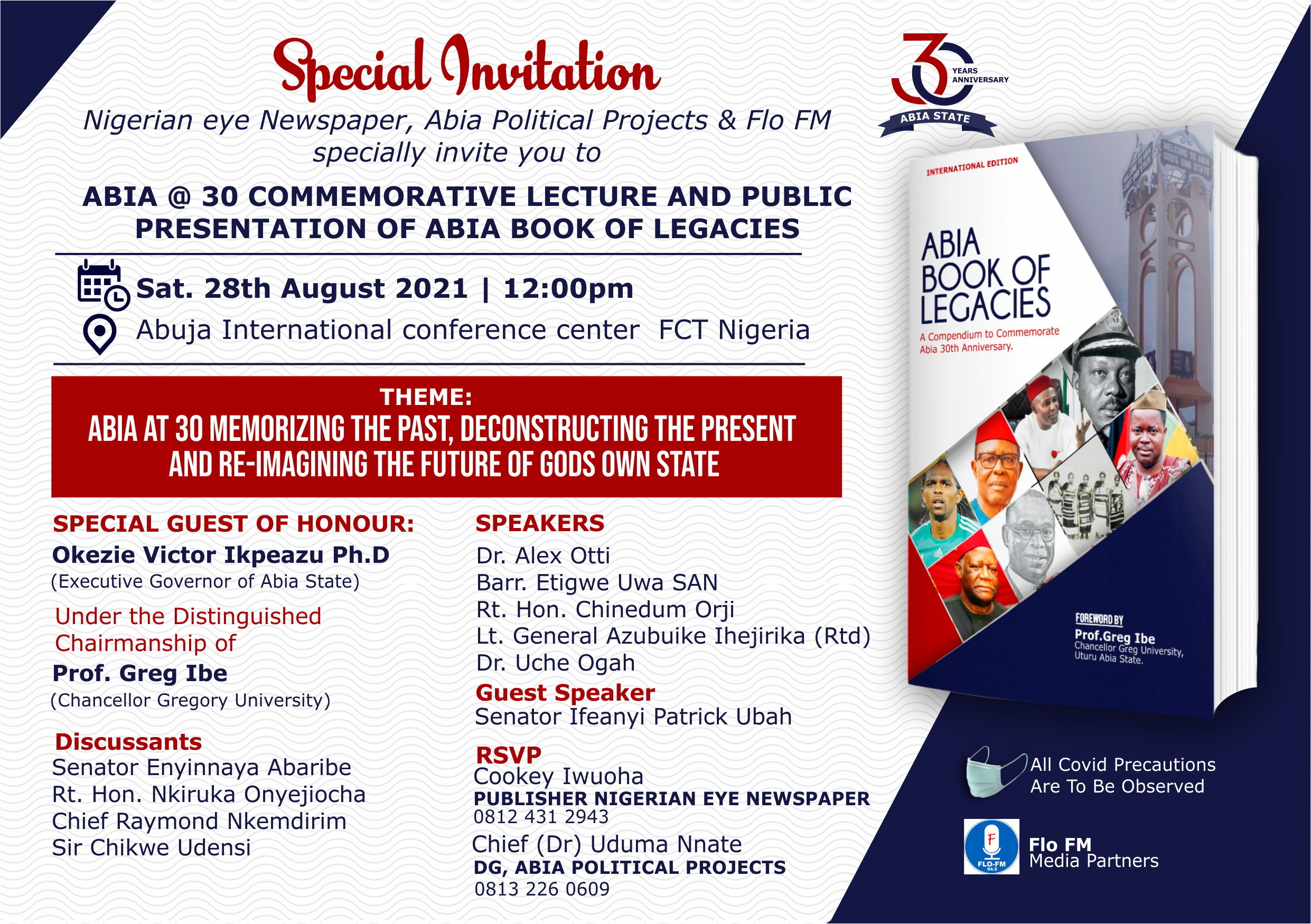 In commemoration of Abia State’s 30th Anniversary this year, Abia Political Projects, Nigerian eye Newspaper, Flo FM in collaboration with civic society organisations are organising a lecture to mark the event and to honour Abia heroes on Saturday the 28th of August at the Abuja International Conference Center on the theme: Abia at 30 Memorizing the past, Deconstructing the present and Re-Imagining the future of Gods’ Own State.

The major highlight of the event will be the presentation of Abia Book of Legacies: a compendium of notable historical incidents and individuals that had made a difference in the nation. In which iconic Nigerians from Abia state were featured, illustrious Abian’s like the foremost Nigerian Educationist Alvan Ikoku, the former Military Head of State Johnson Thomas Aguiyi Ironsi .

Speakers that are expected to be at the event includes the Minister of State for Mines and Steel Development, Honourable Uche Ogah ,former Chief of Army Staff Lt General Azubuike Ihejirika, with System consultant for Interpol Sir Chike Udensi, former director of the department of security services Nigeria Raymond Nkemdirim , Speaker of the Abia State Assembly Rt Hon. Chinedum Orji leading the list of confirmed discussants, Senator Ifeanyi Patrick Ubah of the Young Progressive Party expected as a guest speaker and Governor Okezie Ikpeazu as the Special Guest of Honour.

The event will be chaired by Professor Greg Ibe an entrepreneur par excellence, who is among those people still keeping the flag of Abia and its people flying.

The event is aimed at engaging the Abia stakeholders, State executives, elected officials, opinion moulders and the citizens in a family conversation that will serve as the catalysts towards chatting a path for the emergence of a glorious and prosperous Abia.

Abia was created from the old Imo State on the 27th of August 1991 by the military administration of General Ibrahim Badamosi Babangida (rtd), and since then has undergone series of political leadership , with democratic governance in the 4th republic leading its socio-economic transformations that are aimed at impacting the lives of ordinary Abians.

In this article:Abia@30,Abuja Abia @30,Commemorative lecture