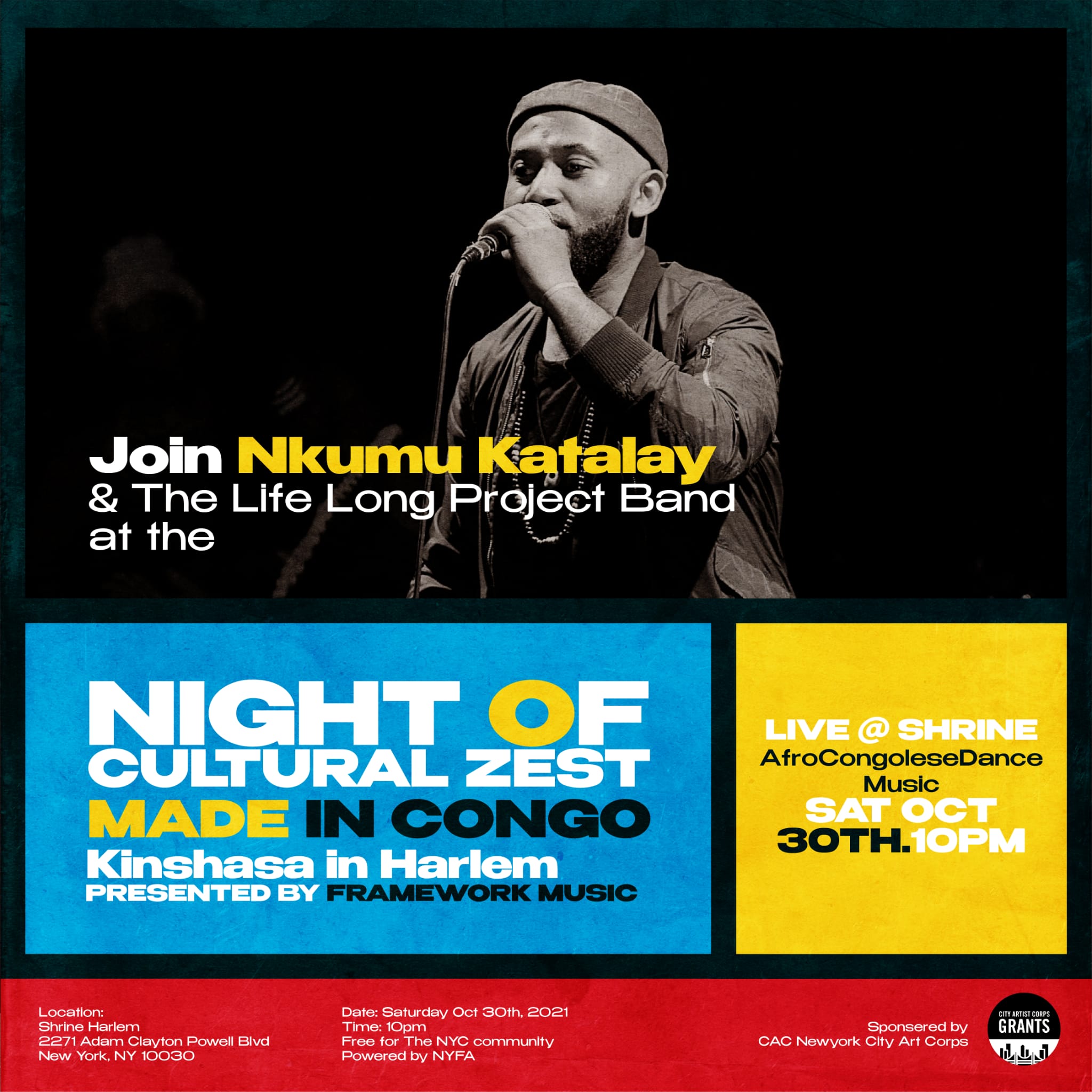 All is set for an evening of Ecstatic Experience at Shrine Harlem situated at 2271 Adam Clayton Powell Blvd, New York, NY 10030 on Saturday, Oct 30th, 2021, from evening till Midnight, to be led by Nkumu Katalay and his “Life  Long Project” Band.

This year’s Kinshasa in Harlem Night of Cultural Zest Made in Congo is expected to be an extra ordinary evening with a multicultural dimension , as the event will feature paintings of Destiny Santana, who was born in Harlem with Afro- Cuban heritage and will have Zambian born Nelo as the host.

In 2013, Nkumu organized the first night of cultural zest to celebrate and highlight the contribution of Congolese culture in the Diaspora. The same year, he curated a new event called Kinshasa in Harlem: The Cradle of culture meets the Diaspora, to commemorate his hometown, Kinshasa, a vibrant city that has influenced African modern sounds for decades.

As New York City is the global reference for urban cultural influences, Kinshasa remains the plethora of modern African music, a place where most modern African music has dug from, so the Night of Cultural Zest (Made in Congo): Kinshasa in Harlem brings all the above together

Born in Kinshasa but raised in Harlem, Nkumu Katalay a musical artist, orator, educator, cultural curator, multi instrumentalist and social activist, will unify New York City’s African Diaspora and the inter-communal neighborhoods of New York, New Jersey and Connecticut for the social-cultural initiative, Night of Cultural Zest (Made in Congo): Kinshasa in Harlem at the Shrine in Harlem, New York

In his innovative effort  to explore the similarities between the two cities of Kinshasa and Harlem that he draws his cultural influences from, he  has brought  along his team who are excited to be part of this dual- city’s creative resurgence, and they are looking forward to performing live Congolese music/dance at Shrine Harlem this Saturday

The self styled Rumbian Funk Maestro is set to utilize the vital opportunity of the event to showcase to the world the innocence and mystery in the mystic art of expressing Congolese music with guitar and drums, conveying his own rhythms and style inspired by century old traditions and culture of his ancestors and predecessors right at the center of Harlem. Every aspect of the evening will be worth to be beheld.

The premise of this event which is built on the symbolism and Image of Congo Music inspired in Kinshasa would indeed reflect in the exact vibe of Nkumu Katalay’s performance with his band which is expected to be  dynamic and outstanding as he is known to top expectations of his audience always.

The event is free for everyone eager for a new musical experience and is being powered by the New York City Artist Corps  and  Framework Music LLC.