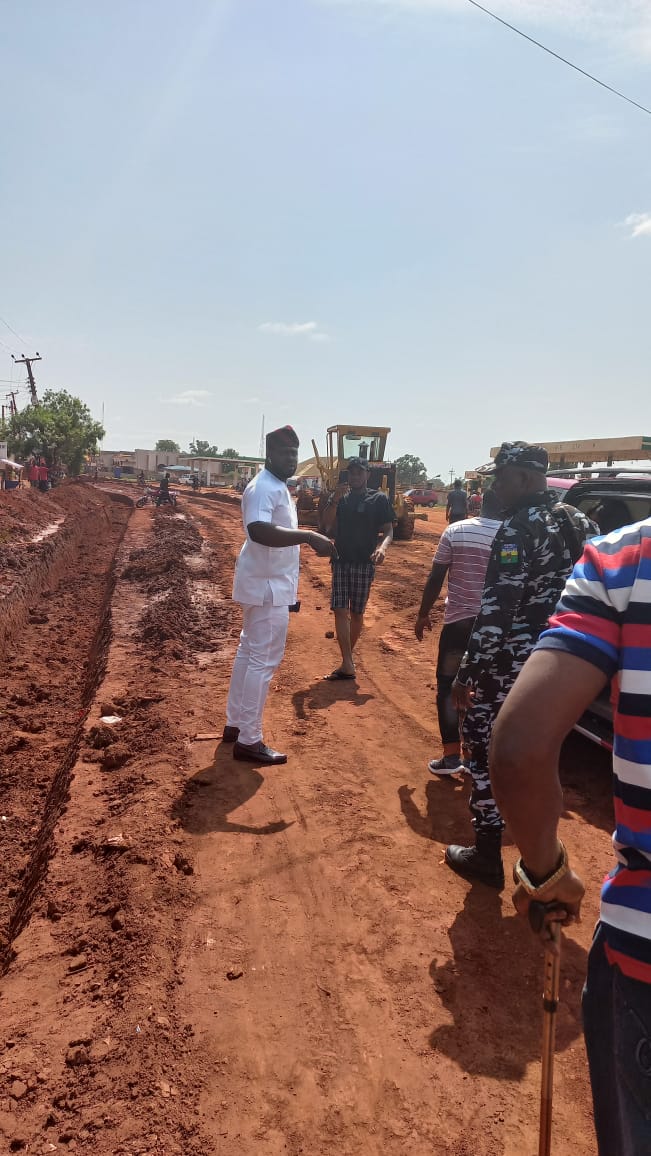 One of Nigerian foremost humanitarian organisation, the Ochacho foundation commences rehabilitation of roads network in Otukpo township and the opening up of other roads leading to various farm land around Otukpo /Ohimini federal constituency

an eye witness report coming from the lively city of Otukpo/Ohimini federal constituency in Benue state, North Central Nigeria, has it that a foremost Non governmental organization known as Ochacho foundation is presently undertaking the rehabilitation of roads network in Otukpo/Ohimini axis of the state

According to Mr. Mark Iyodo Muhammed who reported, told our News desk on the level of job ongoing at the site covering over 5KM. Along Otukpo Makurdi federal Road

He further stated that heavy equipments belonging to Ochacho real homes developer is seen on the site as workers began digging of the gutters for construction of a non existing drainage system in the past, while highly experienced engineers were seen supervising the job

But with the new development where this drainage factor is considered, one can conclude that when completed will server for long till the government come to building it again

Also, from a monitored radio program on Joy FM Otukpo, which had Hon. Alex Enokela Ogbe, the president of Ochacho foundation on Saturday expressed great hope for the people of Otukpo/Ohimini federal constituency

He said that “with the bringing of these heavy duty equipments to the area, the beautiful people of his home state can be rest assured that they are here not to talk, but to work just like they did with the installation of about 1000 street lights in Otukpo town already and are still going to bring more”

He further stated that “after completing this road under rehabilitation, the next place will be opening up of access roads to our various farms in order to make ease the transportation of farm produce into villages, towns and our respective market places”

Also, the Radio program didn’t finish without allowing callers make contributions as the feedbacks were prayers upon prayers for the Ochacho family ably led by King Mohammed Adah Ochacho, the bank ruler of Ochacho real homes, one of the leading real estate mogul in Nigeria

In conclusion, honourable Alex who is aspiring for the position in the national house of representatives said that “they are fully back to help ameliorate some avoidable hardship his good people are going through via more altruistic developmental projects such as the rehabilitation of roads, building and renovation of schools, provision of street lights and potable clean water project among other things” in Otukpo/Ohimini federal constituency