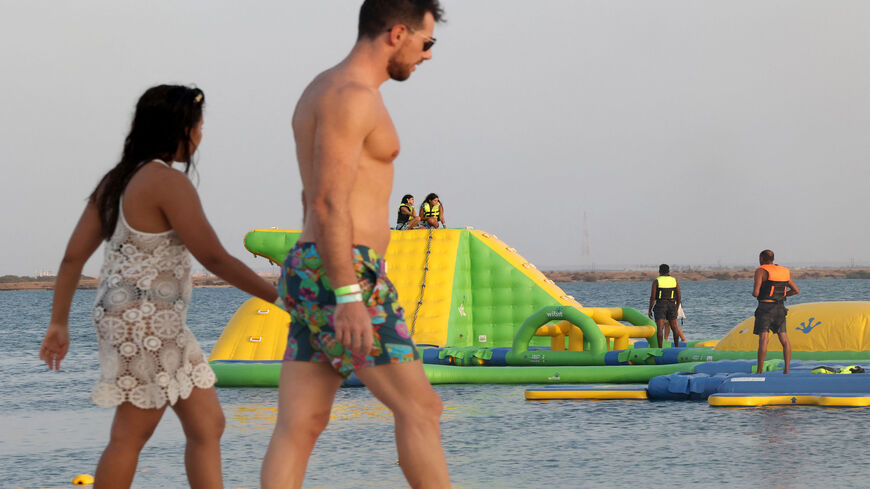 The kingdom is open for business and tourists, in the context of rapid social change, which has some conservative Saudis anxious that changes are coming too fast.

News reports over the last week cast doubts and sent contradicting signs about the new policies of openness in Saudi Arabia, through which the kingdom seeks to ease some of its conservative restrictions, aiming to attract investors and help its private sector.

The first was about the opening of a new beach in the Jeddah area, which is considered the modern commercial and tourism hub in Saudi Arabia. Pure Beach is located in King Abdullah Economic City, about 125 kilometers (78 miles) north of Jeddah’s city center.

After paying 300 Saudi riyals ($80), a visitor can enter Pure Beach, enjoy music, dancing and a floating water park; no gender restrictions are in place and marital status for couples is not checked. Women wear bikinis and both sexes can smoke the hookah.

For decades, these scenes were not allowed in the kingdom, but since Crown Prince Mohammed bin Salman came to power in 2017, Saudi Arabia, the birthplace of Islam, has slowly opened up.

The emerging story about Pure Beach sends the message that Saudi borders are open for visitors, tourists and even businesses to explore investment opportunities in the kingdom.

Saudi analyst Ahmed Alibrahim told Al-Monitor that the kingdom’s leadership started these measures a few years ago, but the coronavirus pandemic has caused a delay. He said that Saudi Arabia aims also to use these developments to promote its soft power abroad and to tell the world that the kingdom is changing.

“Hosting international events, launching entertainment activities and easing some social restrictions in some places are tools to help Saudi Arabia improve its image in the United States and Europe, instead of using lobbying campaigns,” he told Al-Monitor.

Just a few days later, reports claimed that the Saudi government imposed a dress code for visitors to the first Saudi Grand Prix that will be held in Jeddah in December.

According to the Spanish platform Marca, Formula 1 event organizers received a list of rules from the Saudi Ministry of Sports on what is acceptable attire and what isn’t for the event.

Pure Beach and the racetrack are located in the same area of Jeddah — at the beach resort women can wear bikinis, while at the racetrack women can’t wear transparent clothing, skirts or shorts above the knee, backless dresses or tight clothes.

Neither the Saudi Ministry of Sports nor the Formula 1 media office replied to a request sent by Al-Monitor for a comment on the Marca report.

However, a representative who is working for Experiences, the exclusive sales agent for the Formula 1 in Dubai, who asked not to be named, confirmed the dress code requirements, noting that it is a gender rule applied in the kingdom in all public places.

He noted, “It’s normal for the Saudi authorities to impose a dress code as the Formula 1 will be held in a public place … in line with the culture and traditions in Saudi Arabia.”

Alibrahim added, “In many countries around the world public places have rules. Visitors to the kingdom are aware of those rules and many of them come and respect it. The United Arab Emirates is a role model for Saudi Arabia in this regard as there is freedom but at the same time there is respect for the country’s traditions.”

Abdullah al-Ulomi, a young Saudi man studying aviation abroad, told Al-Monitor that the majority of Saudis under the age of 30 crave a different living environment, and the country’s leadership seems to have realized this.

Saudi Arabia has a population of around 35 million, two-thirds of whom are under the age of 35, according to the Saudi General Authority of Statistics.

“We can all see how happy young people are when they participate in social events such as the opening of Riyadh Season 2021.”

Riyadh Season 2021, which started Oct. 20 and will run until March 2022, is part of an initiative that aims to promote diversity in the kingdom and to attract audiences from all over the country and abroad.

The initiative, which is held for the second time, includes more than 7,000 events at 14 entertainment zones, ranging from music concerts, art exhibitions and auctions to food and local and international sports games.

More than 750,000 people in Boulevard Riyadh City zone attended the opening ceremony Oct. 20, according to the General Entertainment Authority.

Videos on social media showed thousands of young people flooded into the festival arena, dancing to Western music with fireworks in the background.

Ulomi said, “I travel and study abroad and I want to have some freedom in my country. My family also travels every year for vacation, but when we have things like this in Saudi Arabia it is better for us to spend a vacation in our own country.”

In 2016, Saudis spent 97.3 billion Saudi riyals ($26 billion) on tourism overseas, but this amount declined by 20%  the following year to around 78 billion riyals ($21 billion), according to a report by the Saudi Gazette, coinciding with the coming to power of Prince Mohammed and the start of his new policy to modernize the kingdom.

However, some Saudis are not happy with the changes that are taking place in their country. On social media they criticize the country’s transformation, considering it a waste of money and a violation of religion and Saudi traditions.

Ola, who preferred not to disclose her last name, is a media professional who believes that the pace at which Saudi society is opening up is very fast and does not commensurate the long-standing conservative system. She told Al-Monitor that these new policies may be associated with social problems.

“There were incidents of harassment [in September] during the kingdom’s National Day celebrations and Riyadh Season 2021, which confirms the need for measures to be taken in accordance with these changes [openness that the kingdom is witnessing], such as increasing awareness among the youth through education, the media and special arrangements to protect women during these events,” Ola said.

She concluded, “The decision to impose a dress code during the Formula 1 might have been taken due to these incidents.”