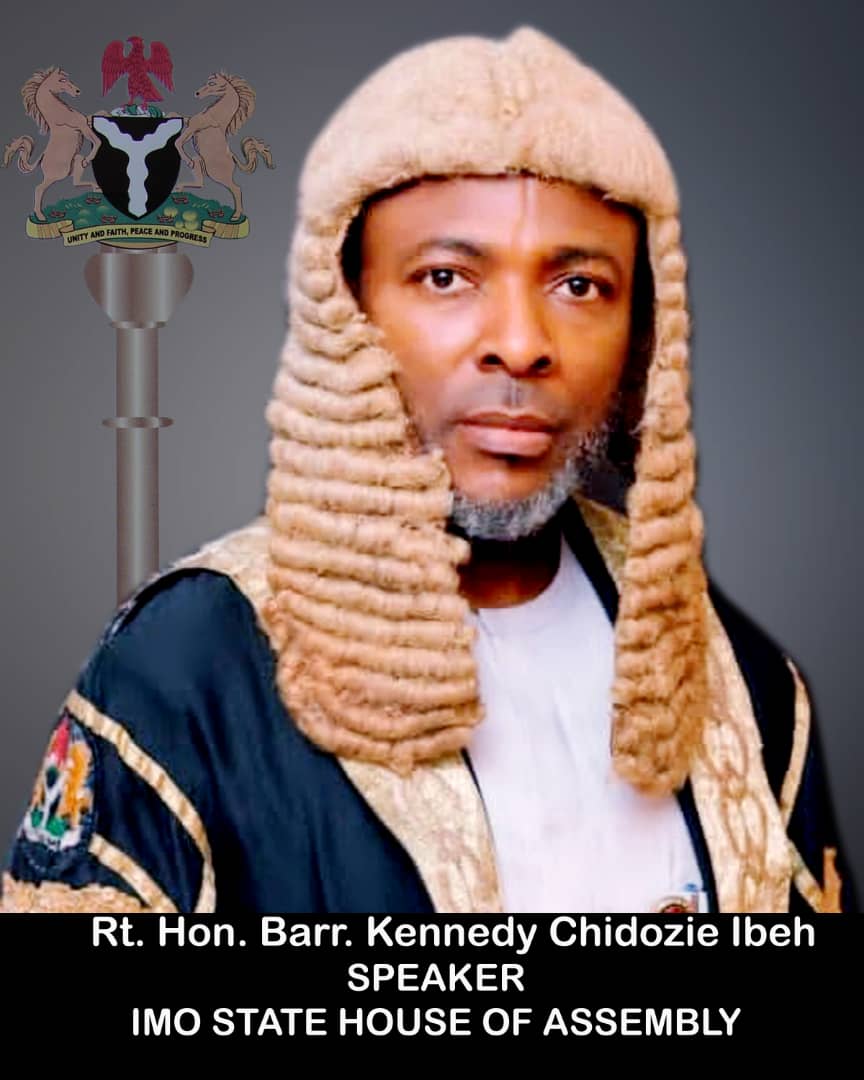 The saying that “A Golden Fish Has No Hiding Place” today (12/04/2022) came alive when the Imo State House Of Assembly passed a Vote of Confidence on the Speaker, Rt Honourable Kennedy Chidozie Ibeh.

Speaking on the matter, the Sponsor of the Motion and Deputy Speaker, Rt Honourable Amarachi Chyna Iwuanyanwu expressed his happiness and satisfaction on how the Speaker has so far piloted the affairs of the State House Of Assembly, describing him as a visionary leader, pragmatic, focused and a man with capacity.

Rt Honourable Amarachi Chyna Iwuanyanwu, who is also the member representing Nwangele State Constituency, eloquently reeled out reasons for his submissions. The Motion which was Seconded by Rt Honourable Chiji Collins, member representing Isiala Mbano State Constituency, received overwhelming endorsement by all the Honourable Members present at plenary, who Individually thanked the Deputy Speaker for the motion, describing it as timely.

Defending his Motion, Rt Honourable Amarachi Chyna Iwuanyanwu maintained that the Speaker remains one of the best things that has happened to the State presently, arguing that Rt Honourable Kennedy Ibeh is taking care of the welfare of the Parliamentary Staff Association Of Nigeria(PASSAN), Imo State Chapter, as well as imposing decorum on the floor of the House and most importantly, sitting on time.

Iwuanyanwu went further to describe Speaker Kennedy Ibeh as a leader who is fulfilling all his promises, in ensuring that the State House Of Assembly is better positioned, more focused and generally accepted by Imo citizens and other Nigerians as doing excellently well, in the areas of lawmaking, oversight and appropriation. Not done, Rt Honourable Amarachi Iwuanyanwu further stated that under the Rt Honourable Kennedy Ibeh led House Of Assembly, Honourable Members, Management, Staff and Political Appointees embarked on seminars/workshops, to upgrade and increase their work output.

Amara Iwuanyanwu also went further to state that the Speaker has consciously bridged the gap between the Majority Caucus and Minority Caucus of the House, insisting there is no “Political Party Affiliation” in the House, but One family who are together in love and unity, for the progress of the state.

According to Rt Honourable Amarachi Chyna Iwuanyanwu, “Under the leadership of Rt Honourable Kennedy Chidozie Ibeh, the job of quality reconstruction of the Imo State House Of Assembly began, with constant supervision by the leadership of the House, as well as interfacing with the Executive Arm Of Government to ensure that 5km roads for each of the 27 LGAs was awarded for construction”, the Deputy Speaker Submitted.

The following members supported the motion and further gave brilliant testimonies of the leadership qualities of the Speaker, Rt Honourable Kennedy Chidozie Ibeh……….

Before the Rt Honourable Speaker, Barrister Kennedy Chidozie Ibeh, put the Motion for adoption, he commended the Deputy Speaker, for the motion, and more importantly, for his patriotism and love for the State. According to the Speaker, “I feel so humbled by the Vote Of Confidence. It is a call to more service and to serve the people of Imo State better”. Speaker Kennedy Ibeh equally commended the Clerk Of The Imo State House Of Assembly, Barrister Mrs Chinelo Emeghara and the Parliamentary Staff Association Of Nigeria (IMHA chapter) for their unified and consolidated support.

When the Speaker put the Motion for adoption, it was unanimously adopted with no dissenting voice.

Earlier at plenary, the suspended Member Representing Isu State Constituency, Hon Mrs Ngozi Obiefule was pardoned after she apologized to the leadership of the House, for her unparliamentary conduct. When the Rt Honourable Speaker read out the content of her apology letter, and put it to vote, it was unanimously endorsed by members. Thereafter, Mr Speaker lifted the suspension on her.

Also, the report of Adhoc Committee on the suspension of the former Speaker Of Imo State House Of Assembly, Rt Honourable Paul Emeziem was looked into. The House dissolved into Committee of the whole, with Mr Speaker as Chairman. The report of the Committee showed that there was no bases for the Purported Impeachment of Deputy Speaker, Rt Honourable Amarachi Chyna Iwuanyanwu, as all the alleged signatories will confirmed to have been forged.