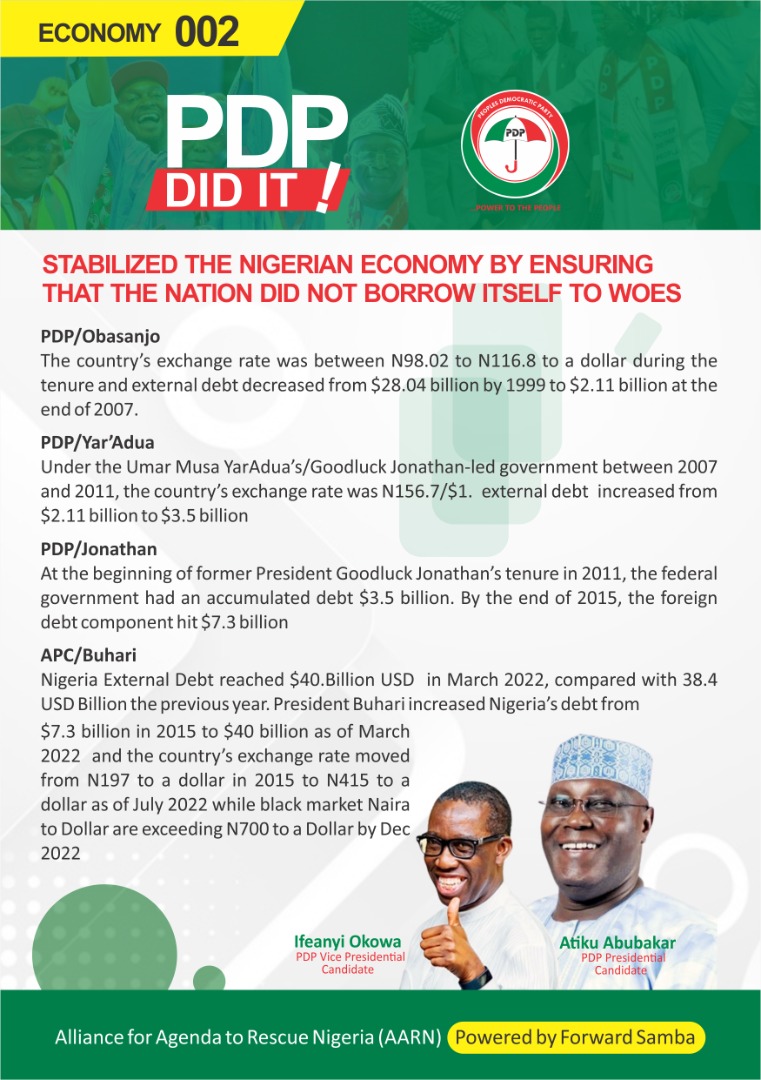 PDP DID IT CAMPAIGN SERIES

It’s an unarguable fact that Nigeria has fared better under the democratic dispensation of the PDP from 1999 to 2015 than the APC Administration that has only succeeded in stunting the socio-economic growth of this nation, impoverishing its citizens both with hardship and insecurity .

It’s quite unfortunate that this stagnation had to occur after People Democratic Party PDP had already led the nation  through 16years of continuous infrastructural and socioeconomic development, and strengthened our democracy and rule of law and national unity.

Its highly disheartening that the present administration has not improved any facet of the Nigerian society in the last 8 years, rather the nation has fared worse from one disaster to another,  from the economy, to  infrastructure, insecurity to rule of law, we are almost at the brink of extinction with socio political persuasions and agitations tearing us apart in every corner from North East to South East.

Once again Nigerians need to come to the understanding that the PDP is the best institution equipped with the right ideology of equity, pragmatic vision, , the best hands and best brains with the experience and technical know-how to recover the nation from the doldrum and Golgotha it has presently found itself .

The People’s Democratic Party (PDP) is a Nigerian political party that was founded in August 1998 by members of various groups and organization including the groups G-18 and G-34.

A group of reformers, activists , politicians, moralist who were  socially conscientious under the auspices of the All Politicians Summit convened a meeting in 1997 to discuss the way out of what was fast becoming a festering dictatorship under late Gen. Sani Abacha. That meeting, led by Dr. Alex Ekwueme was brutally dispersed by the security apparatus of the Sani Abacha’s regime.

Dr. Ekwueme undeterred by the brutish antics of the regime continued rallying key political figures of different ideological persuasions under a new platform called Institute of civil society. In the midst of all this confusion, a group of political leaders, eighteen of them in the first instance and later thirty-four decided to “dare the lion in his den”. This group known as the G-34 later formed the nucleus and rallying point of the associations that formed what is today, the Peoples Democratic Party, (PDP).

Today the Devil is shamed and the truth is out  that PDP was not what it was called and rather was a victim of misinformation and propaganda in today’s Nigeria, as those that promised change and called them looters , inexperience and ineffective has fared worse   so there is need to start discerning the lies from the truth , to start telling the full truth to remind Nigerians  PDP’s  sacrifices and accomplishments in making Nigeria better and setting the path that made progress possible for both its allies and opponents , the struggles ,the innovative and  humane efforts  of the party and its leadership  in providing Nigerians  the GOOD LIFE  that they had and are now MISSING since 2015 and why they should all join hands in ensuring that the party reclaims power on 25th February 2023 and bring back the GOOD LIFE.

The emergence of social media has increased the people’s awareness and hunger for information and most people  are swayed daily to and fro as their emotions fluctuate from stories being forced into their consciousness, we the Alliance for Agenda to Rescue Nigeria (AARN) have undertaken years of research in order to present to all Nigerians the true story  with verifiable facts and statistics to help us make the most important decision of our life and for our children unborn.

With PDP DID IT CAMPAIGN SERIES Nigerians  will be better informed in making the right decision by Voting PDP on 25th February  to continue its ideological renewal and modernization of the Nigerian nation with over 100 verified facts drawn from the annals of Nigeria’s socio economic history.

The world and especially younger generation of Nigeria needs to hear again and again the true story of PDP, its Love for this nation called Nigeria,  its  noble achievements that led the nation on an upward trajectory consistently for almost 2 decades, and the need to join the party its leaders to Recover Nigeria ,the task is accomplishable , just one man one vote  for PDP will lead us all to Success and  Glory.

In this article:PDP DID IT Campaign