Uneasy lies the head that wears the crown they say and that idiom is not far from the truth as the new Imo Governor is constantly worried and therefore has not slept soundly from that fateful day that the judiciary proclaimed him the new governor of Imo. Series of his body language and actions  indicates of a man in desperate need to placate the situation and win the love of all Imo people as well as cement his position to  ensure that his new won victory does not escape him.

As a dedicated catholic the new governor started off by rushing to Asumpta Cathedral Owerri  to give thanks to the creator of heaven and earth and seek for wisdom and blessing of the almighty  and endorsement of his brethren and that of Archbishop Obinna who is one of the most influential voice in the state. The PDP protest came up last Sunday and he ordered the shutting out the public from gaining entrance into the “Peoples House”  which now requires internal clearance from the CSO before you are allowed entry except for the workers at the government house and media personnel’s attached to the state house.

This he has followed by a 360 degree return from his inaugural statement punchline in which he called for a halt on every activity in the state account from Imo  accountant general whom he also requested for the account details  from, promising  to probe all the 3 recent predecessors before him which are  former governors Ikedi Ohakim, Rochas Okorocha and Emeka Ihedioha a move he has countered  earlier this  week  and called the news circulating on the subject as rumour, he reportedly cleared the air on what he said while inspecting some facilities of the Imo Government house he emphasized on the issue by hinting that though the business of governance includes probing and accountability, his directive to the Accountant-General of the state and the officials of the civil service to furnish him with the financial statement of the state may have been misconstrued. 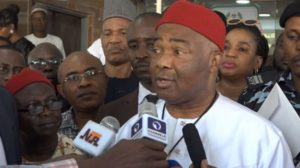 “When I asked for a status report from all the ministries, many people misunderstood it or assumed that the purpose of calling for that information is because I want to probe; I never said that I was going to probe anybody.The business of governance involves probing if need be; so I needed that information because there is no official handover from anybody, and for me to start the work, I need to know what is on the ground.”

He reiterated that  since there’s been no proper handover from the immediate past government, if during an investigation and for proper accountability there’s need to call on anyone for questioning as it deems fit, the government will not hesitate to do so. This was received by Imolites as an attempt to gain the confidence of the public who are urging him to kickoff his own craft of governance instead of starting with probe statements which will further exacerbate rancor in the state and heat up the already tensed situation in the state, which he has soft-pedaled on.

But the uncertainties over his safety as the governor of Imo State no longer  persists as he is believed to have   reached enough assembly members in the chambers to assure him votes enough to counter any impeachment plans against him whenever it will arise, as he is no longer at the mercy of  PDP who are still believed to be  in the majority with 12 seats, APC currently with 10 Assembly seats, while APGA and AA that shares the rest assembly seats are in alliance with APC but we know that politics being all about interest there are no eternal certainties in pacts between different  political parties.
It is believed that Gov Hope Uzodinma  is close to accomplishing   his first mission  with his party chieftains in the state  which is strategizing behind the curtains to reach more deals with more lawmakers in order to effect more defections move from other assembly members in the state to APC ,even though on the surface he seems to be in a safe place with the marriage of convenience between APC ,AA and APGA in the state that is still sailing smoothly.

The new Governor is not at a safe place in his political journey at this time and cant afford a sound sleep regardless of this feat which is achieved, the whole issue is no longer worrisome despite the supposed stalling of  the Speaker of the Imo house of assembly over his supposed  move to join APC an action that will unravel and instigate lots of counter reaction in the chamber. The actions of Hon.Chiji Collins the speaker of the Imo 9th Assembly in the next few days will have a lot of impact to make in how the political situation in the state will pan out in this administration.

Election Rerun: Imo PDP Poised For A Clean Victory Vows To Make it Difficult For The Judges Again

Marriage of Strange Bedfellows in Imo...

Chief Tony Chukwu Emphasize on the...