Breaking News
Ogelle Signs Creative Content Pact with Trinidad and...
Champions League is back and Journey to the...
Magu, Detained By Police In Abuja For Further...
Ghana Opposition Leader Names Woman as Running Mate...
FashionGHANA Changes The Narrative Of Supporting African Fashion...
Magu was Not Arrested but Invited for Questioning–DSS,...
DSS Arrests Ibrahim Magu the Acting Chairman of...
Hushpuppi and Mr.Woodbery, Welcome to Chicago!
Wike, Atiku, Ihedioha, Kema Chikwe, to Lead PDP...
All Is Set for the Multi Million Dollar...
Home Politics Marriage of Strange Bedfellows in Imo Politics as the Struggle Over who Becomes the Next Speaker Nears its Climax
Politics

The unending drama currently rocking the politics of Imo state was at play again yesterday at the state house of assembly,as lawmakers in the Imo House of Assembly returned to the chessboard to determine who leads them in the new administration, ushered in barely two weeks ago via a supreme court judgement.

The Speaker of the Imo House of Assembly Hon. Chiji Collins representing Isiala Mbano Constituency defected yesterday after noticing that PDP members in the house has consistently been on the decrease following the first 4 defection of its members two weeks ago, and with the defection of one of the strongest mouth piece of the party Hon. Uche Ogbuagu the member representing Ikeduru Constituency in Imo State House of Assembly and serial entrepreneur that runs 2 radio stations in the state and two other assembly members , Hon Chiji Collins came to the realization that there is no future for him and his ambition if he remains in PDP, in the state.

APC’s Rapid Progress in the Assembly..

The cards are playing out perfectly for the All Progressives Congress (APC) in the state, 9 defections earlier in the week had their numbers strengthened from 1 to 10, which if added the 4 assembly members of AA their sister party in the state brings their number to 14 though the seat for Njaba Constituency underwent a rerun on January 25th with the AA member occupying it Mrs Uju Jovita Onwudiwe still emerging victorious with 6142 votes while

Charles Abia of Peoples Democratic Party (PDP), and Perry Uchenna Ekwunazo of All Progressives Congress (APC) scored 5,487 and got 2,662 votes respectively ,this victory for AA when complimented with the 4 recent defections from PDP has raised the number of the APC Assembly members in state to 19 with PDP at 8.

APC and AA, the Unification Of Strange Bed Fellows..

It is finally uhuru for Governor Hope Uzodinma’s APC regardless of its marriage of convenience with Action Alliance Party in the state which can go wrong at anytime depending on the interest of the stakeholders in the party. 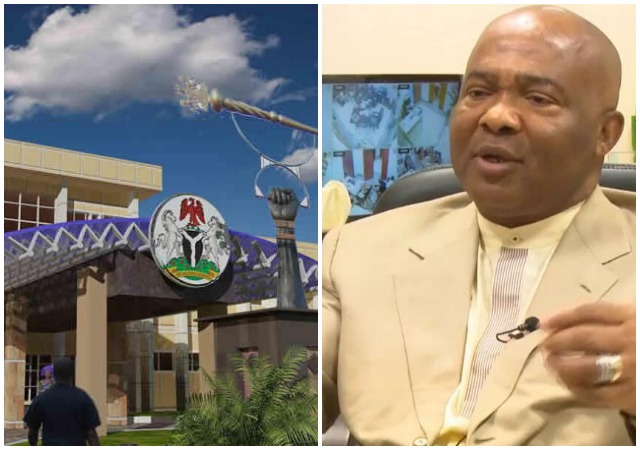 And since the leaders of the two party were foes till few weeks ago APC are not throwing in all their hope of averting impeachment on a relationship tainted with heavy fragilities despite the fact that Ugwumba Uche Nwosu has indicated his interest to return to his former party now under Hope Uzodinma but 3 assembly members of AA has so far defected and only 1 remained put in their party ,a weak signal of the party’s intention to become the 4th power house in Imo Politics alongside PDP,APGA and APC. So with more defections from PDP Senator Hope Uzodinma is finally at a safe place with more numbers form other sides than just AA in case of a future fall outThe Impact of the Resignation of the Deputy Speaker.. 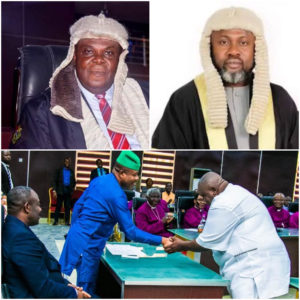 Imo Next Speaker and the Fate of Hon. Chiji Collins..

The main issue in the house is who emerges the speaker of the house which according to the zoning of the democratic arrangement in the state still remains in the Okigwe Zone and with the state house adopting a law that only a ranking member can assume the position of speaker is also playing to the favour of Hon.Chiji Collins who returned to the Imo assembly after winning his election under APGA last year and is representing Isiala Mbano Constituency in Okigwe zone of the state which has given him double credence for the position with only Hon.Kennedy Ibe of the AA but now APC as the only ranking member from Okigwe zone in the power play.

There are unconfirmed speculation that the new Governor is willing to give his blessing and support the re emergence of Hon. Chiji Collins as the speaker of the house and continue in the position under him, if only he will just publicly defect to APC, which the Speaker did yesterday regardless of the discomfort it must have caused him after the people’s democratic party’s unanimous agreement for none of their remaining 12 house of assembly member not to defect anymore at an inner caucus meeting that they held at the country home of Chief. Emmanuel Iwuanyanwu the leading party chieftain in the state which now has been flouted by the speaker and 3 more house members

As Honourable Chiji Colins has finally come clean where his loyalty lies in the new administration and hoping that fate plays in his favour and enable him to retain his seat at the apex of the Imo House of Assembly.

I’ve read several excellent stuff here. Definitely value bookmarking for revisiting. I wonder how so much effort you put to make this type of fantastic informative website.

There is noticeably a bundle to find out about this. I assume you made sure nice points in features also.

I simply want to say I am just newbie to blogs and seriously enjoyed your page. Likely I’m likely to bookmark your website . You actually come with great well written articles. Cheers for sharing your web-site.