Breaking News
Magu, Detained By Police In Abuja For Further...
Ghana Opposition Leader Names Woman as Running Mate...
FashionGHANA Changes The Narrative Of Supporting African Fashion...
Magu was Not Arrested but Invited for Questioning–DSS,...
DSS Arrests Ibrahim Magu the Acting Chairman of...
Hushpuppi and Mr.Woodbery, Welcome to Chicago!
Wike, Atiku, Ihedioha, Kema Chikwe, to Lead PDP...
All Is Set for the Multi Million Dollar...
Thiago Alcantara On his way to Liverpool for...
Tension in Ghana Market Over the Arrest of...
Home Entertainment Social Media’s Influence on Criminal Cases
Entertainment

Moroccan actress Mariam Hussein made headlines after being granted a pardon following her controversial arrest in the UAE in 2018.

The actress was filmed at a new year’s eve party in late 2017 dancing ‘provocatively’ in public with American rapper, Tyga.

The video of the Moroccan celebrity has over 560,000 views on YouTube.Dancing provocatively in public is a crime in the UAE. Hussein faced a 2-month prison sentence and deportation charge following her arrest in February 2018.

Hussein argued that she was unaware the singer was close to her, denying the charges. “My honor was abused in this video. How can I show consent while I am giving my back to the singer and do not know what is happening behind me?”

“Besides, do you really see that I had assaulted or had been assaulted in this clip? I am African and this is how we dance.”

After spending one month in prison and facing deportation from the UAE, Hussein was granted an official pardon by the UAE.

After Emirati media announced Hussein’s pardon, she took to her Instagram account, sharing with over 630,000 followers a statement showing her gratitude to the UAE for her release. 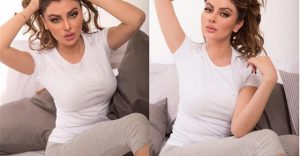 “Praise be to Allah; I was pardoned by the state of justice and law,” the Moroccan actress wrote.

“I would like to thank my country, the United Arab Emirates. May this country grow more glorious and prosperous. I especially would like to thank our sovereign leaders and our sheikhs, the rulers of the state, who laid the foundations of justice and equality for all those who live in this nation which is dear to our hearts.”

“Today I’m reaping the fruits of justice and I ask God the Almighty to add to the glory and pride of this country over time, and I would like to thank everyone who supported me in the moments of trouble, which passed in peace.”

Mariam Hussein was born in Tetouan in northern Morocco. The 31-year-old actress moved to the UAE, where she rose to fame. She is best known for her roles in the 2011 movie Sea Shadow and 2018’s Adi Ask.

Along with her acting career, Hussein has launched a UK based beauty brand called QM Lashes (Queen Maryoum Lashes).

Because of Hussein’s massive influence, her criminal case was public and her new year’s celebrations were seen by millions of people across the globe. News outlets, social media users, and celebrities across the MENA region covered and critiqued the incident, spotlighting a moment Hussein did not expect the world to see.

Hussein’s arrest and subsequent release prompts the question, would Hussein’s case have gone to criminal court were she not a celebrity?

If Hussein’s criminal case were private, the public would have had less influence on its outcome. News articles, viral videos, and criticism from the public would not have interfered with the case.

It is also highly unlikely that Hussein would have been pardoned were she a private citizen with no celebrity status. Although, with Hussein’s influence, many fans, and even celebrities unified their voices in support of the release of Mariam Hussein

Singer Ahlam Alshamsi showed her support for the Moroccan actress to her 8.9 million followers on Twitter, sympathizing with Hussein. She addressed her comment to Emirati journalist and lawyer Saleh Al Jasmi who filed the criminal case against Hussein.

“I have a request for you and I hope you take it into account. Stop talking about the incident, I am sure you have more important things to worry about. You need to try to at least find yourself and make yourself loved. Look at your brother, Hussein El Jasmi, he is so respected. Mariam Hussein is a human and every human being makes mistakes,” the Emirati singer wrote.

Mariam Hussein has now returned to the UAE, where she is a permanent resident.

What’s Happening i am new to this, I stumbled upon this I’ve found It absolutely helpful and it has aided me out loads. I hope to contribute & aid other users like its aided me. Good job.