The Covid -19 outbreak which was recently declared a global pandemic by World Health Organisation (WHO) is exhibiting new characteristics that was not earlier thought possible as animals are now being confirmed as receptors of the virus .

This has prompted WHO to remove a section of their corona virus myth busters page  which said there was no evidence that animals such as Dogs and Cats could be infected as new evidences emerge.

The technical lead of WHO emergencies program Dr. Maria Van Kerkhove has confirmed the new change of status of the Covid -19 as she said the canine tested “weakly positive,” meaning low levels of the virus were found about a month ago.

In other developments Belgian virologist Steven Van Gucht has revealed at the nation’s daily national corona virus conference that a Cat for the first time has been confirmed to be infected by the virus from its owner that was recently confirmed positive as well which has been reported by Belgian national broadcaster VRT Reports.

A Belgian woman from the city Liege Province has infected her cat with Covid-19 the report clarified. The animal is believed to have lived in close contact with its owner contracting it a week after its owner did.

“The veterinary medicine faculty in Liège reported that a coronavirus infection has been determined in a cat. The cat lived with her owner, who started showing symptoms of the virus a week before the cat did,” said professor Steven Van Gucht.

“The cat had diarrhoea, kept vomiting and had breathing difficulties. The researchers found the virus in the cat’s faeces,” he added. They did not say whether the cat was still alive.

Worldwide, it has been highly exceptional for the virus to pass from human to animal. So far, only three cases where the pet has been infected by humans are known across the world. It concerns two dogs in Hong Kong, and now a cat in Belgium. Both dogs did not show any signs of disease, but the cat has respiratory and digestive disorders, according to the Federal Food Agency. 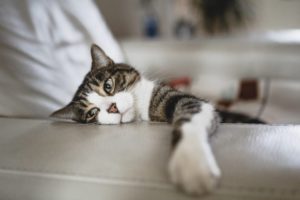 The government of Hong Kong has further urged people to stop kissing their pets after a second dog tested positive for corona virus, but stressed that the animal had not shown any symptom of the disease and has further entreated the public not to abandon their pets following this discovery.

The  second pet to test positive is a German Shepherd living in the Pok Fu Lam area on Hong Kong Island and has been sent on quarantine with another mixed dog from the same residence after their owner tested positive to Covid-19 the Agriculture, Fisheries and Conservation Department (AFCD) said in a statement.

The first case was of an  elderly 17-year-old Pomeranian, which had tested “weak positive” during repeated tests for the virus, the Dog died two days after it was released from quarantine disease-free. The AFCD said the dog’s owner wasn’t willing to allow an autopsy to determine the cause of death.

The Hong Kong animal-welfare authority stressed that there is currently no evidence that pets can be a source of the virus or that they can get sick from it. “Under no circumstances should [owners] abandon their pets,” it said

Cats and Dogs are mammals too and have many of the same types of receptors on their cells as humans,  which can enable the virus to attach to these receptors, but it’s probably not possible for it to enter their cells and replicate.

Animal to Human Transmission of Covid-19

As of now it seems not possible that there can be animal to human transmission of the virus though the reverse has been confirmed as the pets that tested positive acquired it from their owners who are already carriers of the virus.

“We want to stress that this is an isolated case. Additionally, in this case, we are talking about a human-to-animal transmission, not the other way around,” said Van Gucht. “There are no indications that this is common. The risk of animal-to-human transmission is very small,” he added.

“Animals are not vectors of the epidemic, so there is no reason to abandon your animal,” the National Council for Animal Protection (CNPA) reacted in the aftermath. However, it advises sick people to “respect the usual rules of hygiene,” to wash their hands before and after stroking their pet, and to “not rub their nose against their pets.”

People infected with corona virus are being advised to be cautious and should limit contact with their pets, and don’t let them lick you on the face. If the virus is in your secretions, and there’s any potential of transmission, these are ways it could be transmitted.

Covid-19 :The Odds Against Chloroquine-Debo Oladimeji

Madagascar slams WHO for not endorsing its herbal cure

Revealed:One in three patients who die...

COVID-19: We may reopen worship centres...