A Japan-bound plane carrying medical personnel and equipment helping to fight the coronavirus pandemic has burst into flames during take-off in the capital of the Philippines, killing all eight on board.

The Lionair aircraft destined for Haneda, Japan, exploded in a ball of flames as it took off from Ninoy Aquino International Airport in Manila about 8pm local time, the airport said.

Video footage showed a huge plume of smoke rising into the night sky as fire crews doused the fuselage with foam.

The doomed Lionair Flight RPC 5880 was carrying three medical personnel, three flight crew, a patient and a companion, Richard Gordon, a senator and head of the Philippine Red Cross said. 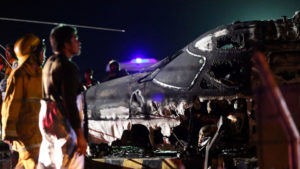 “Unfortunately, no passenger survived the accident,” the Manila International Airport Authority (MIAA) said in a statement.

Among the passengers were six Filipinos, one American and one Canadian, a flight manifest later revealed.

The runway has been closed and an investigation by the Civil Aeronautics Authority of the Philippines was now underway, MIAA said.

The Research Institute for Tropical Medicine – the agency leading the fight against the coronavirus in the Philippines – frequently uses Lionair, which is a Philippine charter flight company, to transport supplies to the medical workers on the front line, the government said.

Donald Mendoza, deputy director-general of the Civil Aviation Authority of the Philippines, said Lionair would be grounded after the crash.

“It’s quite alarming, but we’re looking into the records of this unfortunate event that happened to Lionair. Definitely, we’ll have a thorough investigation,” Mr Mendoza said.

In September last year, nine people were killed when one of the company’s light aircraft crashed in Laguan, a suburban province just south of Manila.

Africa, A Victim of Fake News...

Vendetta or Good Governance:The Casualties of...