Breaking News
Magu, Detained By Police In Abuja For Further...
Ghana Opposition Leader Names Woman as Running Mate...
FashionGHANA Changes The Narrative Of Supporting African Fashion...
Magu was Not Arrested but Invited for Questioning–DSS,...
DSS Arrests Ibrahim Magu the Acting Chairman of...
Hushpuppi and Mr.Woodbery, Welcome to Chicago!
Wike, Atiku, Ihedioha, Kema Chikwe, to Lead PDP...
All Is Set for the Multi Million Dollar...
Thiago Alcantara On his way to Liverpool for...
Tension in Ghana Market Over the Arrest of...
Home Health Las Vegas officials create makeshift homeless shelter in a parking lot
HealthUncategorized

In Las Vegas, the Catholic Charities’ homeless shelter has long served as a facility for people in need of accommodations.

But after one homeless man who used the facility tested positive for coronavirus last week, the shelter was forced to close, leaving 500 homeless people scrambling for a new place to stay. Even Courtyard Homeless Resource Center, a nearby open-air facility, was unable to take in more people as it was almost at capacity.
So City of Las Vegas and Clark County, Nevada officials decided to create a makeshift homeless shelter — in the parking lot of Cashman Center.
Over the weekend, the parking lot of the center, which is normally a convention and baseball stadium complex, transformed into a sleeping space with help from volunteers.
But the sleeping arrangements ignited some backlash on Monday, after an image of homeless people circulated across social media. In the photo, a handful of people are seen lying in white boxes painted on the concrete floor — six feet apart to enforce social distancing. 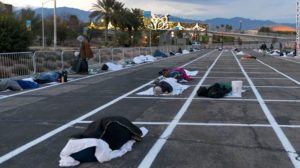 On Saturday, setting up the temporary shelter went smoothly.
About 50 volunteers laid out 24,000 square feet of carpet to create sleeping mats, according to the Las Vegas Review-Journal.
Nearly a dozen medical students from Touro University Nevada helped screen incoming guests, and took their temperatures.
“I’m about to cry,” Denise Lankford, a homeless woman, told CNN affiliate KLAS. “This right here is helping us feel secure, feel safe. Other places, you don’t feel safe.”
The first night the shelter opened, 66 people slept there. But officials started to realize that the carpet could be more harmful than beneficial. 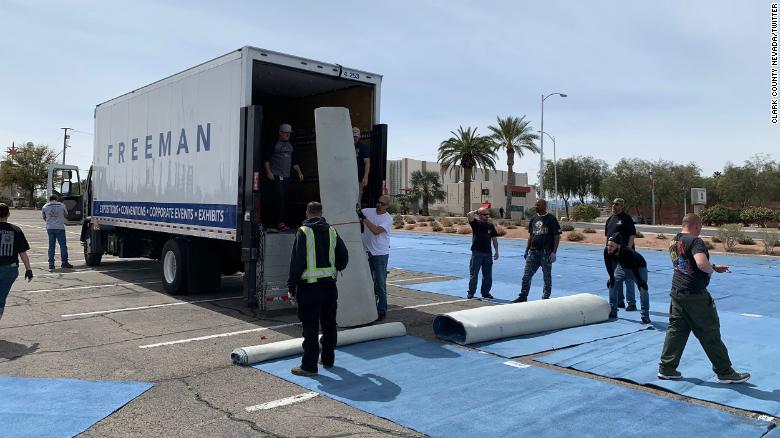 “We found that it was very difficult to disinfect and clean,” David Riggleman, communications director for the City of Las Vegas, told CNN. “We had asked for sleeping mats, which we use at the Courtyard — and those can be disinfected easily. But there were none to be had.”

On Sunday, the amount of homeless people seeking shelter at the facility grew to 117.
Officials decided to swap out the carpet for concrete floor, and painted white boxes six feet apart from one another for homeless people to sleep in. The hope was to enforce social distancing, and prevent further spread of the coronavirus.
However, after pictures emerged of the new sleeping arrangements, many on social media criticized city officials.

Nevada, a state in one of the richest countries in the world, has painted social-distancing boxes on a concrete parking lot for the homeless to sleep in. pic.twitter.com/svNJ0N9r3f

“Horrid! Evidence of a failed society that cannot provide for its citizens the most basic of human needs,” one Twitter user wrote.
“Las Vegas is putting homeless people in parking lots while the city’s hotels are completely empty. For some reason, this photo sums up for me everything that is wrong with this country & its response to the COVID-19 crisis,” another Twitter user said.
Riggleman said the city and Clark County are doing the best they can to deal with a situation that was thrust upon them when Catholic Charities closed its facility.
“I think our entire country has seen the fact that we can’t manage this situation that we are in,” Riggleman said. “It’s not just the homeless. This has overwhelmed our resources everywhere and I think everybody is doing the best they can.”

When asked why the actual Cashman Center wasn’t used to temporarily house the homeless, Riggleman said the building was reserved for overflow hospital space.
He also said Catholic Charities plans to open its shelter by mid-week, at which point the temporary shelter will close.
Despite the recent criticism, Riggleman said he was proud of the fact that “so many people stepped in to help.”
Clark County Commissioner Lawrence Weekly expressed similar gratitude toward community members who volunteered.
“We needed a solution to this problem quickly,” Weekly said in a news release. “And I want to thank everyone involved for their hard work so that our homeless population has a place to sleep tonight.”
Source (CNN)
corona virushomelesspeople
3 comments
0
FacebookTwitterPinterestEmail

The Rise of China’s Divorce Cases, Is a Warning to Rest of Locked-Down World

I am really enjoying the theme/design of your site. Do you ever run into any browser compatibility problems? A few of my blog visitors have complained about my blog not working correctly in Explorer but looks great in Safari. Do you have any advice to help fix this problem?

Wow! This could be one particular of the most helpful blogs We’ve ever arrive across on this subject. Actually Wonderful. I am also an expert in this topic therefore I can understand your hard work.

I just want to mention I’m very new to blogging and site-building and certainly savored you’re web site. More than likely I’m planning to bookmark your site . You certainly have fabulous well written articles. Thanks for revealing your website.