CLIMATE CHANGE: Africa on the precipice of Disaster

The call for nations to rally together and fashion a collective response to climate change has been on the increase in the recent decade, but climate change as a topic or a global challenge is not receiving enough attention in Africa like all the other social agenda in the Millennium Development Goals (MDG) and now the Sustainable Development Goals adopted by UN on  September 27th  2015 in  New York USA.

The Sustainable Development Goals (SDG) is successor  to the Millennium Development Goals which its time frame elapsed in 2015,and its  a set of seventeen aspirational global goals with 169 targets between them, spearheaded by the United Nations  covering a broad range of  sustainable development issues . These included ending poverty and hunger improving health and education, making cities more sustainable ,combating climate change and protecting the ocean and forests.

African governments and Africans  easily find themselves in the picture when propositions are made to combat hunger, poverty and education but climate change seems off topic to average African  and out of place ,uninformed Africans on the issue of climate change don’t see any need for it, because they have failed to understand or realise that drought, change in distribution  of rainfall which normally  triggers famine, flood that rampage cities, destroys farms, shelters and economic activities ,drying up of rivers, melting of glaciers and receding water bodies ,heat stress and dehydration are all effects of climate change. horrifically in the climate change vulnerability index for 2015 seven of the ten countries most at risk from climate change are in Africa.

Climate change is caused by factors such as biotic processes, variations in solar radiation received by Earth, plate tectonics, and volcanic eruptions. Certain human activities have also been identified as significant causes of recent climate change, often referred to as global warming

Drought in HORN OF AFRICA

Negative effects of climate change is being  felt across  all the continent of Africa in different measures in the recent decade, on 28th June 2011 BBC.com reported the horn of Africa as experiencing  its worst drought in 60 years in which arguably almost 10 million people were affected , in the news report UN classified large areas of Somalia, Ethiopia, Djibouti and Kenya as a crisis or an emergency . the drought was partially from a result of a prolonged failure of rains since late 2010.

Africa has seen a decrease in rainfall over large parts of the Sahel and Southern Africa, and an increase in parts of Central Africa. Over the past 25 years, the number of weather-related disasters, such as floods and droughts, has doubled, resulting in Africa having a higher mortality rate from droughts than any other region. 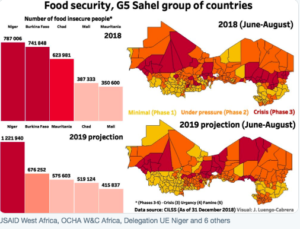 Climate Change and Its Impact On Food Security In Africa

Flooding has been a persistent challenge in North Africa, and  is the Zones  leading environmental challenge. In Algeria 2001 flooding disaster resulted in over 800 deaths and economic loss valued to about 400 Million dollar(AWDR2006).

In South Africa, Mozambique to be precise, the 2000 flood (worsened by two cyclones) caused 800 deaths, affected almost 2 million people of which about 1 million needed food, 329,000 people were displaced and agricultural production land was destroyed (AWDR, 2006).

Flooding is also a challenge in the  East and Central Africa, in West Africa flooding is the third most challenging  ecological disaster resulting from climate change.

In west Africa ,entire communities suffer when there is significant drop in water levels , Nigeria’s Kainji Dam and Ghana’s Akosombo Dam are sources of generating hydro-energy which its output is affected by volume of rainfall or its lack which affects its efficiency in generating electricity. Mali is dependent on the river Niger for food, water and transport. However, great stretches of the river is now facing environmental devastation as a result of pollution. Crops yield and livestock productivity are on the decline in some areas in Africa as a result of climate change

Sensitive diseases and health impacts can be high in poor countries that have minimal resources to treat and prevent illness. Examples of climate related health impacts include:

From the above analysis on negative effects of climate change in African environments, Africans need to wake up to the fact of these dangers that climate change pose to their communities  socially and economically and  urge their leaders to participate intently and vigorously on climate change conferences and present their challenges and demands for effective tackling of ecological disasters already plaguing the continent. They should enhance their demand for  technical and financial support for Africa to increase energy availability, particularly in the rural areas, energy diversification or and for ensuring energy security for investment promotion in climate change friendly development areas.

South Africa delegates represented Africa in the foremost conference in  climate change in 1991 and has reiterated recently through its Intended Nationally Determined Contribution ( INDC)  that  climate change is not a new issue for us in Africa ” Our society has long since been forced to adapt to the reality of a changing climate and increasingly frequent extreme weather events that are the result of emissions of greenhouse gases generated over centuries, predominantly by developed countries.”

climate change is a global challenge and requires global participation and adherent to the policies and laws that is being  enacted to tackle it and Africa and its people needs to be adequately aware on how we are contributing to this menace ,our individual roles in helping our continent rise out of it and thereby ensure our leaders are in the right direction with other continental leaders to ensure we are heard and not denied our rightful position in the ensuing negotiations to tackle this ecological disaster in other to walk out of the precipice we are currently In.