Xenophobia: NALT Calls For The Spirit Of Pan Africanism

National Association of liberation Tigers (NALT); An International civil society social group of has added its voice to the condemnation of the xenophobic acts in South Africa that has led unarguably to the loss of  at-least 7 lives and looting  of foreigners goods and properties.

This sad turn of events is a departure from the continent’s ongoing re-visioning of African integration as a panacea for African solutions to African problems. NALT decries that this is a set back to our collective will as Africans in stretching out hands of friendship and goodwill across borders. This further undermines the position of our continent as the new investment destination of the world as well as an emerging global power block. 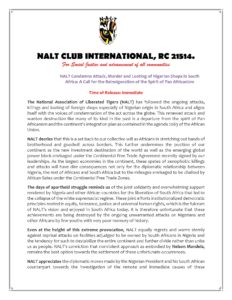 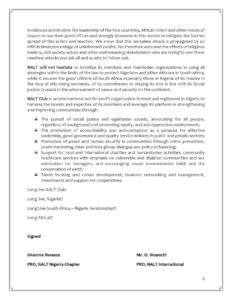 As one of the largest economy in the continent, these spates of xenophobic killings and attacks will have dire consequences not only for the diplomatic relationship between Nigeria, the rest of Africans and South Africa but to the entire integration agenda of the Africa Union.

A recollection of the days of apartheid struggle reminds us of the joint solidarity and overwhelming support played by Nigeria and other Africans countries for the liberation of South Africa that led to the collapse of the white supremacy regime.

As an organization, registered under the Nigerian law and whose mandate and principles among others revolves around defense of human rights and democracy,” we implore the South African President, its government and voices of reason to use their good offices and strongly intervene in this matter to mitigate the spread of this action and reaction. We know that this senseless attack is propagated by an infinitesimal percentage of uninformed South Africans.

The Contents Of Our Empty Graves -8Years After, Iwuoha’s Poetry Collection Still Reverberates

How Lekki Massacre Triggered a Festival of Destruction in Lagos.

My partner and I stumbled over here coming from a different page and thought I should check things out. I like what I see so i am just following you. Look forward to checking out your web page again.

To Kill A Mockingbird Description Myrtle The Great Gatsby Sparknotes

Hi would you mind stating which blog platform you’re using? I’m looking to start my own blog soon but I’m having a difficult time selecting between BlogEngine/Wordpress/B2evolution and Drupal. The reason I ask is because your design and style seems different then most blogs and I’m looking for something completely unique. P.S My apologies for getting off-topic but I had to ask!

I Am Malala Sparknotes Dreams From My Father Español

Take a look at my web site; ebook; http://strateggy.shoppy.pl/Produkt/58vb8haus2,

The Count Of Monte Cristo How Many Pages Datacamp Python Reddit

Take a look at my web site; library

Excellent web site you’ve got here.. It’s hard to find good quality writing like yours these days. I seriously appreciate individuals like you! Take care!!

I simply want to say I am very new to blogs and really liked this web blog. Very likely I’m want to bookmark your blog . You surely have good stories. Thank you for sharing with us your web site.

I could not refrain from commenting. Very well written!

Have a look at my site – book epub

Woah! I’m really digging the template/theme of this blog. It’s simple, yet effective. A lot of times it’s challenging to get that “perfect balance” between usability and visual appearance. I must say that you’ve done a superb job with this. Additionally, the blog loads extremely fast for me on Internet explorer. Outstanding Blog!