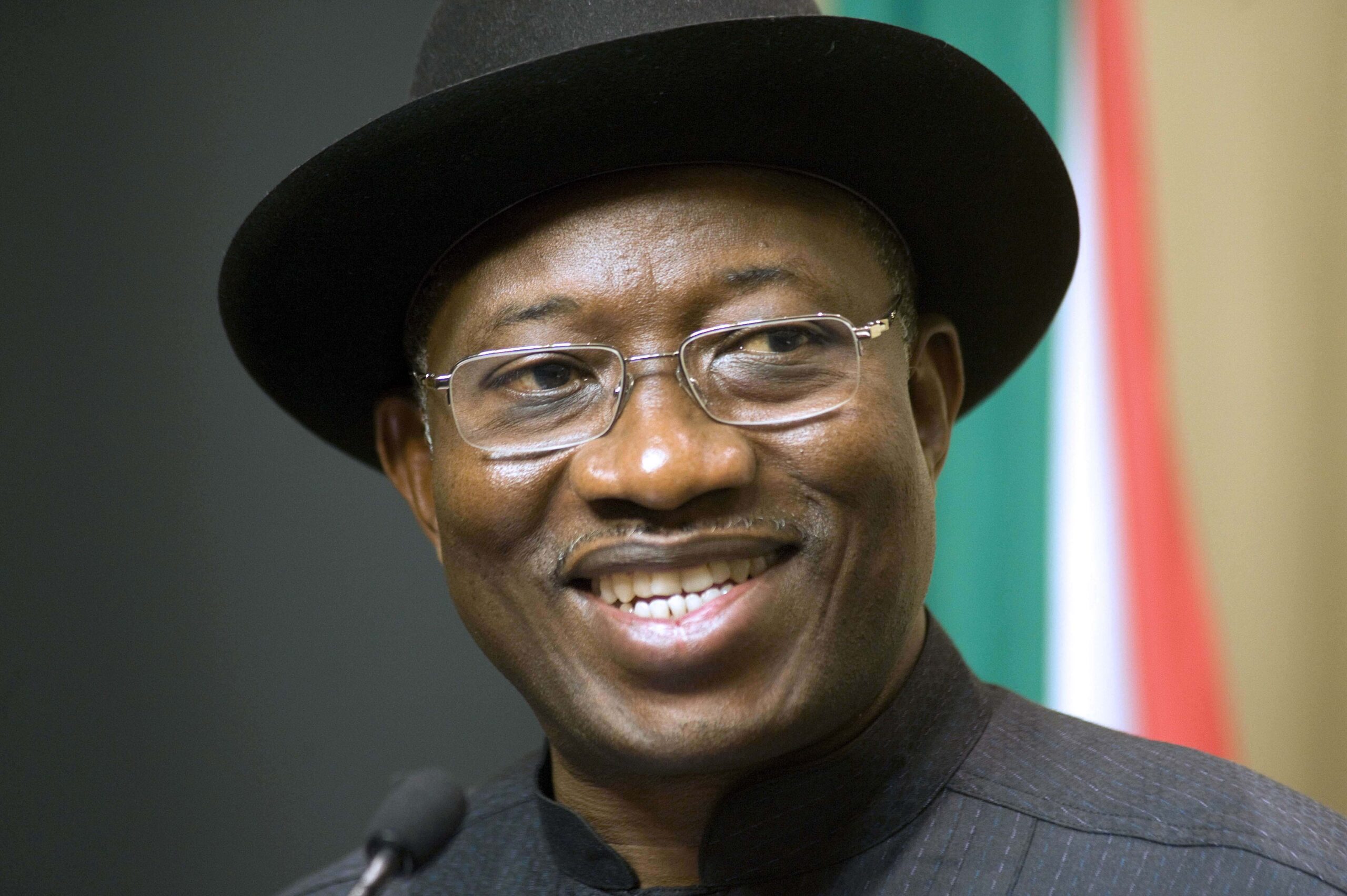 FMR Nigerian President Goodluck Jonathan smiles during a press conference at the South African Parliament in Cape Town, on May 7, 2013. The leaders of Africa's two biggest economies, South Africa and Nigeria, pledged closer ties on Tuesday in what was hailed as a milestone in a sometime patchy relationship. President Jacob Zuma rolled out a red carpet for his counterpart Goodluck Jonathan as ministers signed nine sectoral pacts covering oil and gas, power, defence and communication. AFP PHOTO / RODGER BOSCH

As politicians and stakeholders begin the game of Chess with the 2023 general election drawing nearer, many names are beginning to gain traction as likely candidates to succeed President Muhammadu Buhari.

One name that has come to stay permanently on the lips of Nigerians is that of former President Goodluck Jonathan.

The former president has consistently been linked with a possible defection from the Peoples Democratic Party, PDP, to the All Progressives Congress, APC.

Sources have now revealed that Goodluck Jonathan, who has constantly been on the move across the continent, gave the ruling APC certain conditions before making his move official.

The delay in his official cross-carpeting is reportedly due to government officials not meeting some of the conditions yet.

Top government officials close to President Buhari, who are keen to bring Jonathan to the APC, are set to conclude plans to receive the former president.

A Jonathan in the ruling APC will do harm to the presidential ambition of former Lagos State Governor, Bola Ahmed Tinubu, who is currently the favourite to grab the party’s ticket.

A top source told SaharaReporters that the Buhari had started courting Jonathan since 2020 to bring him into the APC to run for the presidency and succeed Buhari.

And Jonathan, who is purportedly nursing a presidential ambition to complete two terms in office, an opportunity denied him by the APC in the 2015 presidential election, has agreed to play the game.

According to the source, Jonathan would find it difficult beating a wealthy Atiku Abubakar to grab the PDP ticket.

The former Nigerian leader may also have a tough time getting the opposition party’s ticket if Governor Aminu Tambuwal and Governor Nyesom Wike decide to run on a joint bid for 2023 presidency.

Jonathan is said to have given certain conditions to Buhari’s cabal which have yet to be fully fulfilled hence the delay in joining the ruling party.

“About a year ago Jonathan started consulting with APC to see how he could join the party. Jonathan realised that his chances in PDP were slim due to Atiku’s influence and opposition posed by PDP leadership, including Wike who is interested in a joint ticket with Tambuwal,” the source said.

The source added, “Buhari and his cabal had decided to discard Tinubu and started courting Jonathan. Jonathan assisted APC candidate in his state to win election but a court squashed his victory before he could be sworn in.”

The source continued, “Buhari cabal knew Jonathan could only do one term, in fact only 2 years constitutionally. They also know Jonathan is a softie who won’t go after members of the current regime.

“But Jonathan insisted on one condition that monies and assets of his which were seized and frozen by the Buhari government should be returned including, those belonging to his wife, Patience. He told them he had no money and the cabal agreed that they would unfreeze his assets and bankroll him.

“He has insisted that they must demonstrate good fate before he would take the plunge. And they have started to resolve some of the issues raised by Jonathan. For instance, one of his cousins $40 million was returned via two court rulings.”

Recall that in May 2019, an Abuja Division of the Federal High Court discharged and acquitted Jonathan’s cousin, Robert Azibaola, of $40 million laundering charges filed against him by the Economic and Financial Crimes Commission (EFCC).

The judge, Nnamdi Dimgba held that no credible evidence was adduced to establish the offence of money laundering against Azibaola.

The source, however, said the former President is due in the Gambia on a diplomatic assignment in the coming week and might take the plunge by joining the APC when he returns as there are speculations that his seized assets might have been released by then.

“I think the Jonathan’s people were holding out for the release of monies seized from his fronts. Conversations were around the issue of monies frozen and all. The monies may have been released Buhari and the cabal have backed themselves into a tight corner. But fortunately, Nigeria has moved on from 2015. Jonathan has no base in the South-South.”

reports have it that the APC had said it would welcome the former President should he consider joining the party.

The National Secretary of the party, John Akpanudoedehe while speaking on Channels Tv said like every other new entrant, Goodluck Jonathan if he eventually joined APC, would enjoy the rights and privileges extended to all members of the party.

The spokesperson of the former president, Ikechukwu Eze said there is no truth in the defection rumours.

He added that his principal is very busy with other activities and should he decide to defect, it will be communicated through appropriate channels, and not the rumour mill.