Few weeks ago as Nigerians named to shame a Road Safety Staff for neglecting an accident victim, another Nigerian was assisting a stranded accident victim whose Ambulance that was conveying her to hospital broke down on Eliozu road Port Harcourt in River State Nigeria.

The young Nigerian Mr. Basil Ohaka  of BBNG/CMC Group didn’t want attention for his kind action but had to allow the story to go public in order to encourage other Nigerians to lend a helping hand to people who are in difficult positions regardless of the discomfort it might pose to them. 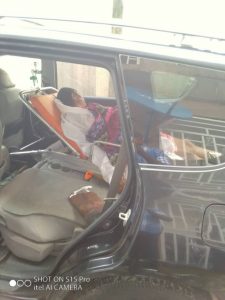 Scene of the Incident

He was on his way to a site as he is into architecture and estate development, when he saw a broken down ambulance on the road side with a nurse and a doctor who were unsuccessfully trying to flag a vehicle to assist them.

He stopped for them and realised that they have an accident victim with a down syndrome in the ambulance going for a head surgery appointment at University of Port Harcourt Teaching Hospital (UPTH).

All the cars sped past them and nobody wanted to stop and help because of the speed lane of Eliozu road, he parked asked them a few questions; they showed him the surgery papers which was to take place by 2 pm of the same day 17th of July.

He rearranged his working tools, car seat and made space for the patient on a stretcher to be lifted into his car and took them straight to the hospital, his joy was that the doctor and the nurse called him later in the day to inform him that the surgery was successful and the lady survived. 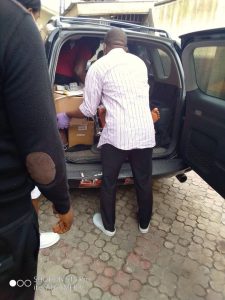 Scene of the Incident

His selfless action saved a life, helped the health workers out of a difficult situation and saved them from a possible worse fate of maybe getting mugged by bandits.

Mr. Basil’s action is in total contrast to the selfish action of the Nigerian Road Safety team in Enugu, that neglected accident victims who were still breathing,refusing to take them to hospital  because their blood will stain their vehicle if they use it to convey them to the nearest hospital and was rather, waiting for a Keke Napep for over 30 minutes as the victims were losing blood and sure their grip on life.

An official car provided for them by the Nigerian Government, an outfit that their job is to ensure safety of drivers, passengers and entire road users, what a shame to such a noble outfit.

It is our collective responsibility to save life and help others in helpless conditions; we should never give up on anything and most especially anyone that is need of a chance to live.